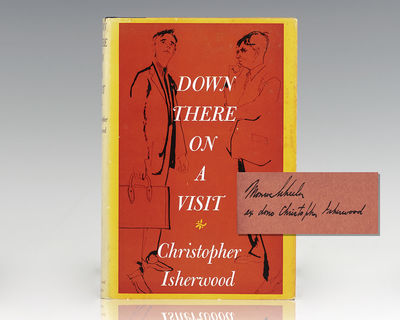 by Isherwood, Christopher
New York: Simon and Schuster, 1961. First edition of this novel from the author of Goodbye Berlin and what many consider his finest novel. Octavo, original cloth. Presentation copy, inscribed by the author on the front free endpaper, "Monroe Wheeler ex dono Christopher Isherwood." The recipient Monroe Wheeler was an American publisher and museum coordinator and a close friend of Isherwood's. Fine in a near fine dust jacket. Jacket design by Paul Bacon. Bremen, 1928. The Greek Islands, 1932. London, 1938. California, 1940. Four portraits, four settings, four narrators all named Christopher Isherwood. Here are the postcards home from a spiritual tourist looking for a new mode of life as well as a new place to live while Europe, and then the world, moves relentlessly toward war. Which of the guides he encounters can lead him to a better future? The businessman, the utopian, the guru, the geisha? Published in 1961, Down There on a Visit is based on material from a proposed epic that would also have incorporated The Berlin Stories. It is now widely regarded as the most accomplished of Isherwood's novels. "This is probably Isherwood's best novel. It offers the sheer pleasure of writing completely personal and yet completely controlled, radiant with observation, never wasting a word, funny and sympathetic" (Stephen Spender, The New Republic), (Inventory #: 104119)
$650.00 add to cart or Buy Direct from
Raptis Rare Books
Share this item