Youth: A Narrative and Two Other Stories. 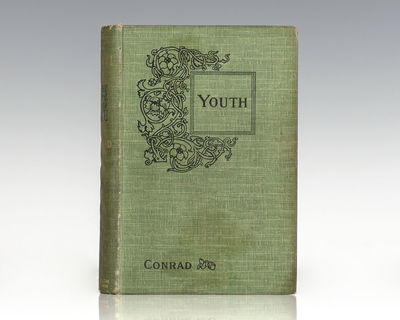 by Conrad, Joseph
Edinburgh and London: William Blackwood and Sons, 1902. First edition, first issue containing the first appearance in book form of Heart of Darkness--"one of the most powerful short novels in the English language" (Farrow, 14). Octavo, original illustrated cloth with gilt titles to the spine. In very good condition. A nice example. Youth and Heart of Darkness were the first of Conrad's stories to attract wider attention. Conrad's "account of a superman running an ivory business in the heart of the Congo... is a masterpiece of sinister deterioration" (Connolly, Modern Movement 14). "A vast body of critical commentary has mined the dense richness and consciously paradoxical quality of this seminal modernist work, with its modern version of a Dantean journey into the Inferno, its Faustian figure of Kurtz provoking ambivalently fascinated horror... The influence of Heart of Darkness can be traced in writers as diverse as T.S. Eliot, Andre Gide, H.G. Wells, [Chinua] Achebe, William Golding, Graham Greene, V.S. Naipaul, and George Steiner, while Francis Coppola's film Apocalypse Now taps some of its rich imaginative possibilities by transposing it to the Vietnam War" (Stringer, 292). (Inventory #: 105423)
$3,500.00 add to cart or Buy Direct from
Raptis Rare Books
Share this item