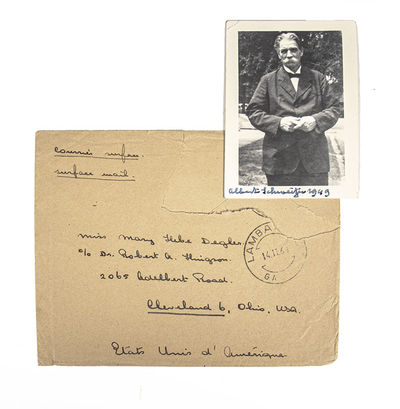 signed first edition
by Schweitzer, Albert
Rare signed photograph of Albert Schweitzer, signed and dated by him, "Albert Schweitzer 1949." Accompanied by an autograph letter signed in French to Mary Hebe Degler thanking her for her photographs and reporting that he is in recovery at the hospital. With the original transmittal envelope. In near fine condition. The photograph measures 3.5 by 2.5 inches. Albert Schweitzer was a German, and later French, theologian, organist, philosopher, physician, and medical missionary. He was awarded the Nobel Peace Prize in 1952 for his philosophy of "Reverence for Life", becoming the eighth Frenchman to be awarded that prize. From 1952 until his death he worked against nuclear tests and nuclear weapons with Albert Einstein, Otto Hahn and Bertrand Russell. (Inventory #: 104872)
$800.00 add to cart or Buy Direct from
Raptis Rare Books
Share this item