THE GREEN EYE OF GOONA 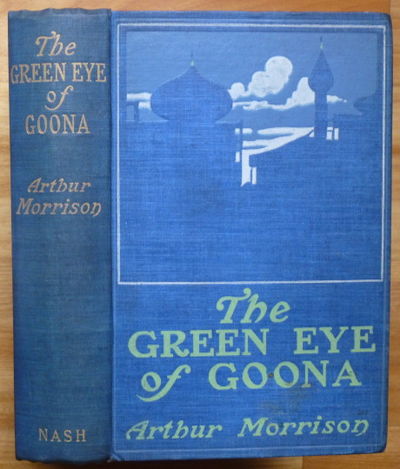 by Morrison, Arthur
1904. Stories of a Case of Tokay. London: Eveleigh Nash, 1904. Original blue cloth pictorially stamped in white and light green. First Edition of this tale of murder and intrigue in India -- featuring detective Harvey Crook and the theft of the Eye of Deccan, the green diamond belonging to the Rajah of Goona. (The American edition, in fact, was titled THE GREEN DIAMOND.) This was the first book by Morrison after his THE RED TRIANGLE, the prior year, completed his four volumes of "chronicles" solved by Martin Hewitt, Investigator. This copy, in the primary pictorial binding (there was also a plain Times Book Club binding), is in fine condition -- scarcely any wear, endpapers intact, no foxing -- and is rather scarce thus. Ellery Queen (The Detective Short Story) page 76. Housed in a custom clamshell case. (Inventory #: 14399)
$425.00 add to cart or Buy Direct from
Sumner & Stillman
Share this item