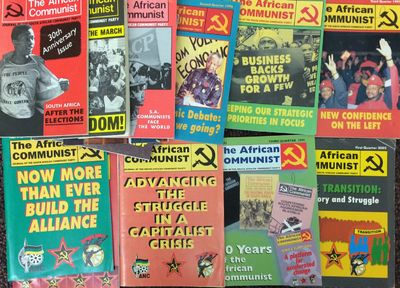 London; Johannesburg: Inkululeko Pubs. for the South African Communist Party, 2002. Paperback. Fifteen issues of the journal. Publication was originally in exile, moving to South Africa after the fall of Apartheid. Generally good to very good condition, though 120 is rather worn and some some issues have minor markings (old prices or letters penned on the cover) or handling wear. Issues present are: 119, 120, 123, 139/140, 141-145, 147-150, 152, 159. Includes coverage of struggles in Southern Africa and elsewhere on the continent, the international anti-Apartheid movement, and the continuing challenges facing South Africa after the ANC's victory. (Inventory #: 242295)
$45.00 add to cart or Buy Direct from Bolerium Books
Share this item

[Photograph of a convention of the Filipino-American fraternal organization]

Seattle : Jackson Studio , 1937
(click for more details about [Photograph of a convention of the Filipino-American fraternal organization])

Chicago : University of Chicago Press , 1990
(click for more details about Four Thousand Years of Chinese Calligraphy)
View all from this seller>