The LIBRARY of HEALTH, and Teacher on the Human Constitution ... Vol I. 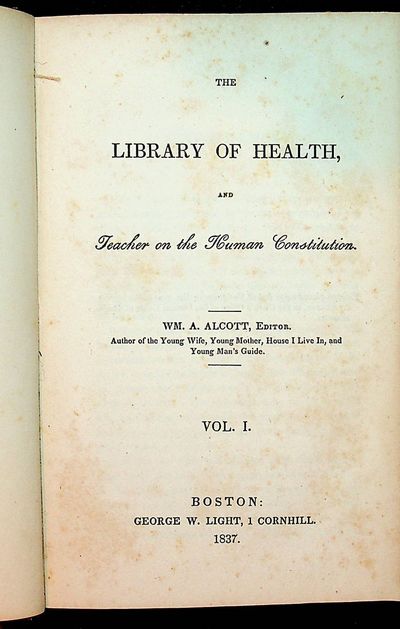 by Alcott, Wm. A. (editor) [ William Alexander Andrus ]
Boston, [ Massachusetts ]: George W. Light, 1 Cornhill, 1837. First Edition. Cloth. Very Good. First Edition. 384 pages. 8vo. (5 x 7 1/4 inches). Publisher's thin cloth covered boards, with blind-stamped decorations and gilt stamped spine. Minor wear to the extremities, a sound clean copy with mild foxing throughout. Very occasional illustration. The first volume of what appears to be an eventual six volumes of this periodical which ran from 1837-1842. Although a periodical (and self-referred as such throughout), there are no separate mastheads or wrappers in this volume, just 12 "issues" with pages headed "Library of Health" and continuous pagination throughout. On one such page there is evidence of what may have been original wrappers removed (page 41). In addition to the twelve "issues", there is a volume title leaf, advertisement leaf, and 2 leaves of the table of contents, all integral to the pagination. Cloth. In the "Prospective Remarks" (pg. 9-) note that the work was begun as an experiment, "entirely at the risk of the editor" and later "The experiment has now been carried on for two years; with how much or how little ability, it is for others to decide. It is sufficient perhaps for us to say that from a single subscriber, the number has increased to nearly two thousand ; and this, too, without special effort - we mean by the usual means of travelling agents..." The content we might refer to as popular medicine, but often drawn from good sources. It also provides localized "news" of what is happening in the Boston area. The editor Alcott was well known and educated. "William Andrus Alcott (August 6, 1798 - March 29, 1859), also known as William Alexander Alcott, was an American educator, educational reformer, physician, and author of 108 books. His works, which include a wide range of topics including educational reform, physical education, school house design, family life, and diet, are still widely cited today." (wikipedia). (Inventory #: 27492)
$83.00 add to cart or Buy Direct from Kuenzig Books
Share this item

The Isolation of an Ion, a Precise Measurement of its Charge, and the Correction of Stokes Law

New York : The Science Press , 1910
(click for more details about The Isolation of an Ion, a Precise Measurement of its Charge, and the Correction of Stokes Law)

[ no place ] : [ no publisher ] , [ no date ]
(click for more details about [ Salesman's Sample ] Photographer's traveling portrait portfolio with three samples (including colored) with protective faux leather roll)
View all from this seller>