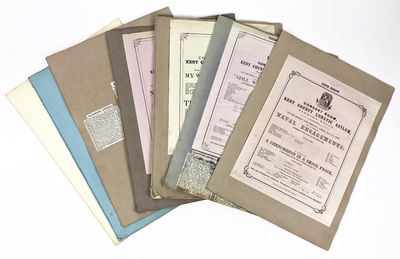 by [Lunatic Asylum] Stevens, J. H. & Newcome, W. T.
Used; Like New/Used; Like New. A highly interesting collection of ephemera relating to amateur dramatics taking place at the Kent County Lunatic Asylum in Kent, England in the 1860's. The archive contains 15 programs, a prologue and two epilogues, a photograph of an actor, and 28 newspaper clippings, nicely laid down on scrapbook pages which are housed in a custom cloth box. Taken together, the items give a fascinating and unusual view into the Victorian treatment of the mentally ill.The original sepia photograph (15 x 9.5 cm) shows a woman (or man in drag) in prim Victorian dress, standing beside a table of men's hats. The subject may be Stevens' wife, who acted in at least one performance. 15 programs, printed poster-style in 4to, one on each side of pieces of India paper of various pastel colors, each with a Kentish horse at the head, above the words "Concert Room, Kent County Lunatic Asylum, Barming Heath." One program (from 1865) has the words "The Last Night of the Season" at the head; another two (from 1866 and 1867) "Fourth Season"; a fourth (from 1867) "Last Nights of the Fourth Season"; and the last two (1867 and 1868) "The Fifth Season." Each program gives a list of the actors and the characters they play, together with the names of the Acting Manager ("Mr. J. H. Stevens" throughout); the Scenic Artist ("Mr. C. Foord"), the Stage Decorator ("Mr. W. Featherstone" and later "Mr. Russell"), Machinist ("Mr. J. Dadswell"), and later, Leader of the Band ("Mr. Russell", "Mr. Gower" and once, "Mr. Venu.") There are generally two main pieces to a performance, with the first (February 26, 1864) consisting of two farces: "My Wife's Second Floor" and "A Thumping Legacy." (As the final entertainment of the first night, "The Asylum Band will perform various selections during the Evening under the direction of M. A. de Sauzay.") The last program features the comedy "Naval Engagements" by Charles Dance, and a comic drama by William Brough, "A Phenomenon in a Smock Frock." The prologue and two epilogues are on the same paper as the programs, and are likewise headed "Kent County Lunatic Asylum." The prologue (1 p., 4to, with Brown's slug) is in two columns, and is titled "Prologue for the Season 1867â8 / (Written by W. T. Newcome, Esq.)" The first epilogue (1 p., 12mo, with Brown's slug) is titled "An Epilogue / Written by Mr. J. H. Stevens, and delivered by him at the conclusion of his performance on Tuesday Evening, the 29th March, 1864; the close of the Theatrical Season." The second epilogue (1 p., 12mo) is titled "An Epilogue / Written for the occasion by W. T. Newcombe, Esq., and spoken by Mr. J. H. Stevens, on Friday Evening, the 29th March, 1867, being the last Night of the fourth Theatrical Season." The cuttings emphasize the high standard of the performances ("The unanimous verdict of those best qualified to judge, was that the good intentions of the amateurs were seconded by an ability little, if at all, inferior to trained professionals"), and the presence of "many of the elite from Maidstone."The care taken in assembling the collection suggests that it may have belonged to J. H. Stevens, steward of the asylum, or to another of those directly involved with the enterprise. Some light toning and wear, but overall in fine condition. Modern blue cloth box with red leather label in very fine condition, 11 x 15 x 1 inches.An article in the Morning Post of April 5, 1867 gives a compassionate view of the drama program: "The efficiency of the amateurs in their respective parts was greatly due to the steward of the asylum, Mr. J. H. Stevens, who was the acting manager. The effect of these entertainments, to which between 400 and 500 of the patients are admitted, is most interesting. The perfect quiet and good behavior of the audience, and their ready seizure of the various "points" which occur, render it difficult to believe in the fact of their insanity. To all those who have inaugurated and assisted in carrying out this kindly movement great praise is due. It is little that can be done to relieve the tedium inseparable from these poor creatures' isolation, but all the plans for their benefit are carried out with a heartiness and kindness that speaks volumes in favor of the genuine humanity of all concerned. (Inventory #: 16971)
$4,500.00 add to cart Available from
Schubertiade Music & Arts LLC
Share this item
Schubertiade Music & Arts LLC
Offered by

Net cash upon receipt of material ordered. We accept credit cards and Paypal payments through our website. We also accept cash, check, wire, and money orders with prior arrangement. Phone and Email orders welcomed:As members of PADA, ABAA and ILAB, we guarantee that all items we sell are authentic and as represented and described. But our guarantee is more than that: as lovers and purveyors of rare books and documents that speak to us across time, this is a fundamental value of our business. We do not offer for sale any items which we do not believe in 100% as to do otherwise would be a betrayal of our values. We strive for accurate descriptions of all items and display photographs of everything we offer and are happy to provide further images on request by email and to answer any detailed questions about condition by phone or email prior to purchase. In the very rare instance where we may have overlooked a significant condition issue, we are always willing to accept a return within 3 days of receipt of an item. But we also sell all items - through our website and through direct negotiation by phone or email - subject to the following stipulation: Unless sold "on approval" by advance agreement in writing, should a client at any point have authenticity concerns about an item purchased from us, we require any return request to be accompanied by THREE written opinions against the authenticity of the item in question. These opinions must be from recognized specialist dealers/authenticators in the relevant field of autographs/manuscripts, art, or books/music. If the claim is in regards to an autograph, at least one opinion must be from a member of the Professional Autograph Dealers Association (a guide by specialization is posted on the PADA website). We do not accept returns under any other circumstances. All purchases made from Schubertiade Music & Arts LLC (through the website, by phone or email, or through any other sales outlet) constitute the purchaser's consent to these terms. In some circumstances by mutual agreement we may agree to accept back an item for other reasons, subject to a restocking fee of 25%
More from this seller


(click for more details about Group of Film Transition Photographs)