The Novels of George Eliot [Including Romola, Middlemarch, and Daniel Deronda]. 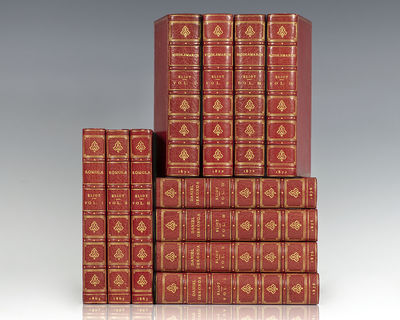 by Eliot, George
London: Houghton Mifflin Company, 1863-1876. First editions of Eliot's Romola, Middlemarch and Daniel Deronda. Octavo, 11 volumes, bound in full morocco with gilt titles and tooling to the spine, double gilt ruled to the front and rear panels, raised bands, gilt turn-ins and inner dentelles, top edge gilt. In near fine condition. From Adam Bede to The Mill on the Floss and Silas Marner, Eliot presented the cases of social outsiders and small-town persecution. Felix Holt, the Radical and The Legend of Jubal were overtly political, and political crisis is at the heart of Middlemarch, in which she presents the stories of a number of denizens of a small English town on the eve of the Reform Bill of 1832; the novel is notable for its deep psychological insight and sophisticated character portraits. The roots of her realist philosophy can be found in her review of John Ruskin's Modern Painters in Westminster Review in 1856. Readers in the Victorian era particularly praised her books for their depictions of rural society, for which she drew on her own early experiences, and she shared with Wordsworth the belief that there was much interest and importance in the mundane details of ordinary country lives. Eliot did not, however, confine herself to her bucolic roots. Romola, an historical novel set in late 15th century Florence and touching on the lives of several real persons such as the priest Girolamo Savonarola, displays her wider reading and interests. Middlemarch, has been described as the greatest novel in the English language by Martin Amis and by Julian Barnes. rom the library of Lavinia Resor Law Robertson with her armorial bookplate to the pastedown of each volume and central gilt monogram. (Inventory #: 102657)
$1,500.00 add to cart or Buy Direct from
Raptis Rare Books
Share this item