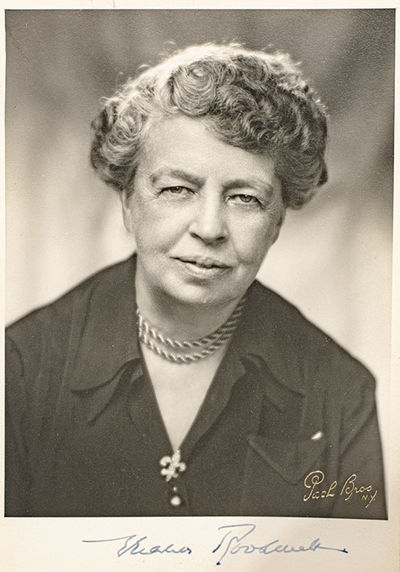 signed first edition
by Roosevelt, Eleanor
Original black and white photograph of First Lady Eleanor Roosevelt signed by her. With the gilt Pach Bros NY photographer's insignia. One of the oldest photographic firms in business in New York City, the Pach Brothers photography studio's patrons included famous and ordinary Americans involved in business, politics, government, medicine, law, education, and the arts, as well as thousands of students, families and children who sat for Pach cameras from 1866 onward. In fine condition. The photograph measures 7 inches by 4.75 inches. Eleanor Roosevelt was an American political leader who used her influence as an active First Lady from 1933 to 1945 to promote the New Deal policies of her husband, President Franklin D. Roosevelt, as well as taking a prominent role as an advocate for civil rights. After her husband's death in 1945, she continued to be an internationally prominent author and speaker for the New Deal coalition. She was a suffragist who worked to enhance the status of working women, although she opposed the Equal Rights Amendment because she believed it would adversely affect women. In the 1940s, she was one of the co-founders of Freedom House and supported the formation of the United Nations. Eleanor Roosevelt founded the UN Association of the United States in 1943 to advance support for the formation of the UN. She was a delegate to the UN General Assembly from 1945 and 1952, a job for which she was appointed by President Harry S. Truman and confirmed by the United States Congress. During her time at the United Nations chaired the committee that drafted and approved the Universal Declaration of Human Rights. President Truman called her the "First Lady of the World" in tribute to her human rights achievements. (Inventory #: 104904)
$500.00 add to cart or Buy Direct from
Raptis Rare Books
Share this item