OFFICE BANK OF THE UNITED STATES (Second Bank of the United States) and The Ohio Life Insurance and Trust Company. Cancelled Personal Checks and Receipts Signed by Samuel Williams 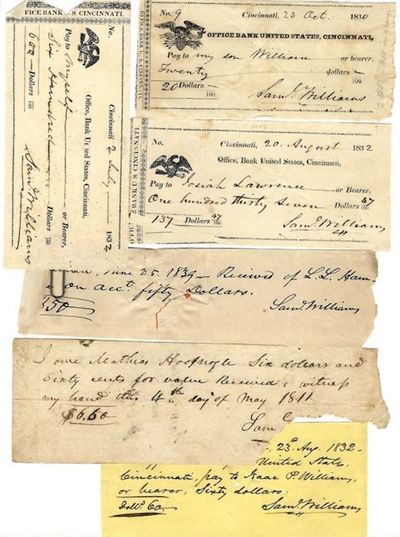 by [Bank of the United States]
Cincinnati, 1839. A group of 31 Documents, most 2.5 x 6 in. Fraying, penned x's, a few tears. Copies of cancelled checks with historical importance relating to The Second Bank of the United States (1816-1836) whose charter was signed by James Madison. Madison hoped that it would end the runaway inflation of the previous five years. The Second Bank was basically a copy of the First Bank, with branches across the country, including this one in Cincinnati. Andrew Jackson, as President in 1828, denounced it as an engine of corruption and his destruction of the bank was a major political issue in the 1830s. Jackson refused to renew its charter and the end of the bank saw a period of runaway inflation. The bank at Cincinnati was closed in 1836. Jackson's executive order requiring all federal land payments be made in gold or silver, drove all banks to require payments in gold and silver and produced the "depression of 1837" which lasted four years. [see: "The Second Bank of the United States," by Ralph C. H. Catterall, (Chicago: 1902)]. The bank at Cincinnati's main business was to secure the debts incurred during the early years of the bank and to superintend sales of real estate. Samuel Williams (1786-1859), whose personal checks these are, was born in Pennsylvania and became a surveyor of the land office and a deputy marshall. (As Chief Clerk of the Land Office under General William Lytle, when Washington was overrun by the British in the War of 1812, Williams saved the records of the Land Office by carrying them away to another city.) These cancelled checks show payments to various parties such as Josiah Lawrence, "my son William," and the receipts show such items as: "Due Samuel Swearingen...forty four dollars and 94 cents...13th of December 1811...Saml Williams...(curious note at bottom: "hotter in town at Mc Clintocks"). A check from 1832 pays Orange Risdon fifty dollars. Orange Risdon was a land surveyor in the early 1800s, working for the Government plotting out the unmapped state of Michigan. [Samuel Williams's papers are at the Lilly Library, Indiana University at Bloomington.] The Ohio Life Insurance and Trust Company (there are about 4 cancelled checks from this institution) was located in Cincinnati during the 1830s through 1850s. Unfortunately for Ohio and the nation, the bank's New York City office ceased operations in 1857 due to bad investments, especially in agricultural-related businesses. The Panic of 1857 resulted. (Inventory #: 64250)
$450.00 add to cart or Buy Direct from
Bartleby's Books
Share this item

THE BLOOD IS THE LIFE OF THE BODY.... THE FOUR-FOLD LINIMENT INFUSES NEW LIFE TO THE DISEASED PARTS, AND REMOVES ALL DEAD HUMORS THAT OBSTRUCT THE FREE CIRCULATION OF THE BLOOD.... [caption title]

[Allegheny City, PA : R. Matchett, Proprietor , 1890
(click for more details about THE BLOOD IS THE LIFE OF THE BODY.... THE FOUR-FOLD LINIMENT INFUSES NEW LIFE TO THE DISEASED PARTS, AND REMOVES ALL DEAD HUMORS THAT OBSTRUCT THE FREE CIRCULATION OF THE BLOOD.... [caption title])