On the Tour with Harry Sprague. 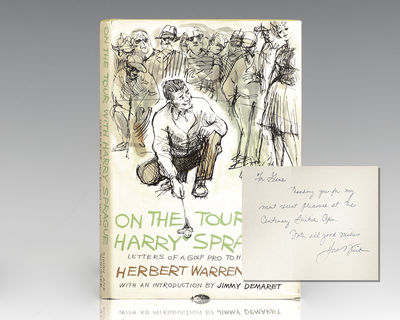 by Wind, Herbert Warren. [Gene Sarazen]
New York: Alfred A. Knopf, 1960. First edition of this work by America's greatest golf writer cracks wise in this humorous peek inside the life and mind of an up-and-coming young pro. Octavo, original cloth, illustrated with drawings. Association copy, inscribed by the author on front free endpaper to Gene Sarazen, "For Gene Thanking you for my most recent pleasure at the Centenary British Open With all good wishes Herb Wind." The recipient Gene Sarazen was a professional golfer and the winner of seven major championships. He is one of five players (along with Ben Hogan, Gary Player, Jack Nicklaus, and Tiger Woods) to win each of the four majors at least once. Fine in a near fine dust jacket. Jacket design by Paul Bacon. Introduction by Jimmy Demaret. D&M 40300. An exceptional association. Harry Sprague may not be the most eloquent golfer on the winter circuit, but spelling and grammar are the least of his concerns. First, he has to work on his putting, which, due to the aradic nature of the greens at Pebble Beach, Cypress Point, the Arizona Country Club, and other Sun Belt courses, is keeping him out of the money. And speaking of money, Harry suspects that his current sponsorship deal--he runs a driving range from April to November for no salary in exchange for the cash to go on tour--might not be the fairest of deals. Finally, there are the fans. In California, Arizona, Texas, Louisiana, Georgia, and Florida, beautiful women line the fairways hoping for a date with their favorite pro. But as Harry soon learns, if wedding bells don't ring the following winter, he'll have hell to pay. First published in Sports Illustrated, these humorous missives from the bottom rungs of the leader board will delight duffers and low handicappers alike. (Inventory #: 104292)
$850.00 add to cart or Buy Direct from
Raptis Rare Books
Share this item