Rules and Regulations for the Army of the United States 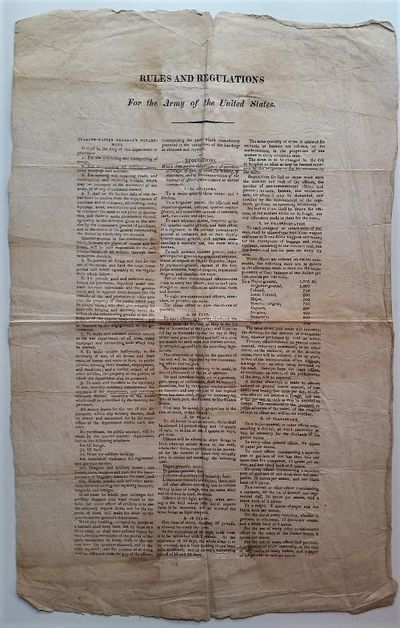 by Quarter Master Generals
(Washington), 1812. Folio broadside. 460 x 285 mm. (18 x 11 1/4 inches). Text printed in three columns. Old folds with a few minor tears at folds, paper stock toned with some light staining; well preserved copy with wide margins. Unrecorded broadside issued by the Quarter Master General's Department, probably in furtherance of legislation passed by Congress in 1812, "An Act establishing rules and articles for the government armies of the United States, with the regulations of the War Department respecting the same" (see Shaw & Shoemaker 26933). The first column outlines the general rules of the department in nine numbered paragraphs. The second and third columns declare procurement guidelines, being "Regulations which shall govern allowances of quarters, of forage, of fuel, of straw bedding, of stationary, and of transportation of baggage of officers, when ordered on distant commands." Regulations governing each of these six categories are set forth in detail. The Quarter Master General's Department was established by Congress in 1780. In 1802 when the U. S. military was reduced during the Jefferson Administration, the Quarter Master Department was dissolved. The department lay dormant until January of 1812 when war with Britain was perceived to be imminent and it was revived with the authority to purchase military stores, camp equipage and other articles requisite for troops and provide means of transportation. This broadside is not cited in Shaw & Shoemaker, OCLC, and is not listed in the collection of AAS. Library Company, and NYPL. (335). (Inventory #: 335)
$1,750.00 add to cart Available from
De Simone Company
Share this item
De Simone Company, Booksellers
Offered by