To the Hon. The Secretary of War (James Seddon), A Petition Requesting Service Exemption for William J. Walker of Edgefield District South Carolina 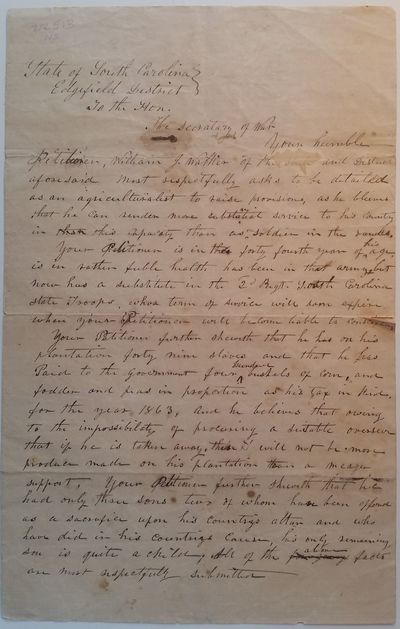 by (Walker, William J.)
Edgefield District, South Carolina, 1864. A rare autograph affidavit signed, by six witnesses. Highly legible. 4to. 290 x 185 mm. (11 1/4 x 7 1/4 inches). 1 1/2 pp. Written on lined paper. Folded with tears at a number of folds, but sound; small holes caused by ink at the signature of Rev. C. S. Mathews. According to the affidavit, William J. Walker was a plantation owner in Edgefield County South Carolina, a rural county on the Savannah River on the western border of the state, just across from Augusta, Georgia. He is writing to the Secretary of War (James Seddon) requesting a deferment from military service based on his age, he was 44 years old, and his feeble health. He states that he already has a substitute who has taken his place in the 2nd Regiment of the South Carolina State Troops, but this enlistment was soon to expire. He also mentions that has forty-nine slaves working his plantation and that over the past year he has "paid to the Government four hundred bushels of corn, and fodder and peas in proportion as his tax in kind for the year 1863. Walker believes that "owing to the impossibility of procuring an overseer that if he is taken away. . .there will not be more produce made on his plantation than a meager support." He goes on to say that "he had only three sons, two of whom have been offered as a sacrifice upon his country's altar and who have died in his country's cause. . ." The affidavit ends with the following statement: "We the undersigned are acquaintances of William J. Walker Esq. do hereby certify that we do believe that the statements made by the same Walker in his petition are true. A. J. Hammond,/Tilman Watson,/Rev. C. S. Mathews (?)/ Rev. S. P. Getzen/ H. A. Shan M. D./ George W. Mills CSA." All the witnesses were prominent citizens of Edgefield, South Carolina and served their community in various capacities. Andrew J. Hammond was a Major in the 24th Regiment of South Carolina Volunteers and made a General at the end of the War. He was a member of the South Carolina State Legislature and was a member of the Secession Convention of 1860. Tillman Watson was a man of little education but highly regarded by his neighbors and was elected to the State Senate and House in the 1850's. According to South Carolina state documents he was the owner of 105 slaves in 1860 and a man of abundant wealthy. He served in the 19th Regiment, South Carolina Volunteers and was promoted from Captain to Major in 1862. The Reverend S. P. Getzen was the pastor of the Baptist Church and a leader member of the clergy who initiated the revival in South Carolina in the 1840's. He became pastor of Edgefield's Mount Lebanon Church in Edgefield in 1860 after forming a number of smaller congregations in the county during the 1840's and 1850's. George W. Mills was a member of the 19th Battalion, South Carolina Calvary. For a detailed article on deferments from military served in the Confederate States Army see William Shaw's article "The Confederate Conscription and Exemption Act" American Journal of Legal History, Vol. 6 No. 4 (Oct 1962), pp. 368-405. (Inventory #: 342)
$1250.00 add to cart Available from
De Simone Company
Share this item
De Simone Company, Booksellers
Offered by

The Extermination of the American Bison

Beeson, John. A Plea for Indians; with Facts and Features of the Late War in Oregon