A discourse wherein is examined, what is particularly lawfull during the confusions and revolutions of government. Or, How farre a man may lawfully conforme to the powers and commands of those who with various successes hold kingdomes divided by civill or forreigne warres ... likewise, whether the nature of warre be inconsistent with the nature of the Christian religion 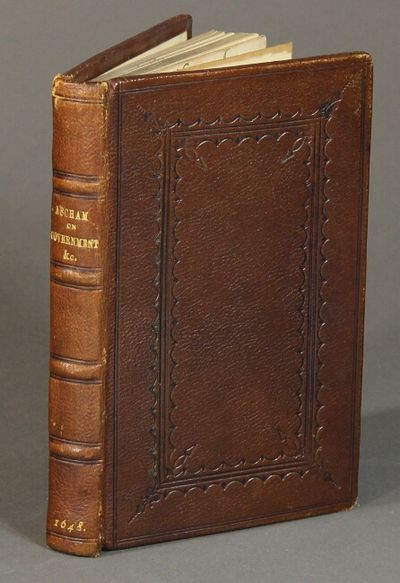 by Ascham, Antony
London: printed [by Humphrey Mosely], anno dom, 1648. 8vo, [12] p.l., pp. 143, [1]; bottom margin trimmed close throughout most of the preliminaries (and occasionally elsewhere) with loss or partial loss to the last lines and catchwords; early 20th-century full blindstamped brown goat a Folger duplicate with their stamp and release mark inside the back cover. A variant of the edition with "printed for Humphrey Moseley" in imprint. A discourse examining what is lawful in 1648, written in support of the Rump Parliament after the execution of Charles I, and in the midst of the controversy over the oath of loyalty demanded by the new republican government.. Addresses "Paying taxes", "Personall service", "Taking oaths," etc. Wing A3920. (Inventory #: 55653)
$747.50 add to cart or Buy Direct from
Rulon-Miller Books
Share this item