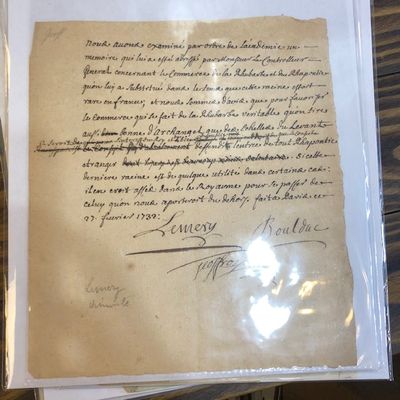 by Lémery, Louis; Boulduc, Gilles-François; Geoffroy, Claude Joseph
1732. Lemery," "Boulduc," "Geoffroy." One page, with cross outs and words added, in French, 7.5" x 8.5", [Paris?]; February 27, 1732. In this report, possibly in Lemery's hand and presumably prepared for the French Academy of Science, Lémery, Boulduc, and Geoffroy write the following concerning the trade of rhubarb We have examined by order of the Academy a dissertation submitted the Controller General concerning the trade of rhubarb and false rhubarb which was substituted for the [latter or former?] because it is rare in France; we opine that in order to [illegible] the trade of rhubarb which is as delicious from Archangel to the Echelles du Levant [ports in the Near East and North Africa], it would be in the interest of the king and the public good that the [illegible] forbid the entry of false rhubarb from foreign lands. If false rhubarb is useful in certain cases, enough of it grows in the kingdom to satisfy that need." Condition: Manuscript has creases along edges, small section of paper loss under Lemery's signature; otherwise good.; Consignment; shelved case 0. Louis Lémery (1677-1743) was a French botanist and chemist. The son of scientist Nicolas Lemery (1645-1715), he was appointed physician at the Hôtel-Dieu de Paris in 1710, and became demonstrator of chemistry at the Jardin du Roi in 1731. Lemery was the author of several works relating to medicine, chemistry, and various foods. Gilles-François Boulduc (1675-1741) was a French chemist. Claude Joseph Geoffroy (1685-1752) was the brother of Étienne François Geoffroy (1672-1731). Like his brother, he was an apothecary and chemist. Having a considerable knowledge of botany, he devoted himself especially to the study of the essential oils in plants. Shelved Dupont Bookstore. (Inventory #: 9-61-1322199)
$2,000.00 add to cart or Buy Direct from
Second Story Books
Share this item