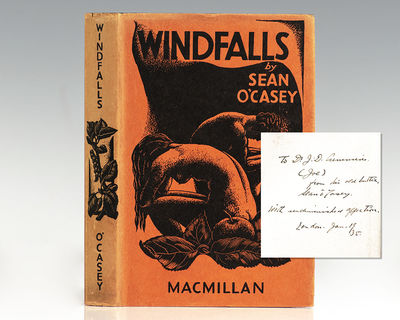 by O'Casey, Sean
London: Macmillan and Co., Limited, 1934. First edition of this work by the Irish dramatist and memoirist. Octavo, original cloth. Association copy, inscribed by the author on the front free endpaper, "To Dr. J.D. Cummins, (Joe) from his old ___ Sean O'Casey With undiminished affection London Jan. 1935." Near fine in a very good price-clipped dust jacket. A committed socialist, dramatist Sean O'Casey was the first Irish playwright to write about the Dublin working classes. O'Casey's first accepted play, The Shadow of a Gunman, was performed at the Abbey Theatre in 1923. This was the beginning of a relationship that was to be fruitful for both theatre and dramatist but which ended in some bitterness. Windfalls contains a collection of verses and three short stories written in an effort to release some of the bitterness that swept into O'Casey when the Abbey Theatre rejected his 1927 four-act Expressionist play about the First World War, The Silver Tassie. (Inventory #: 105844)
$750.00 add to cart or Buy Direct from
Raptis Rare Books
Share this item