Wind in the Willows, The 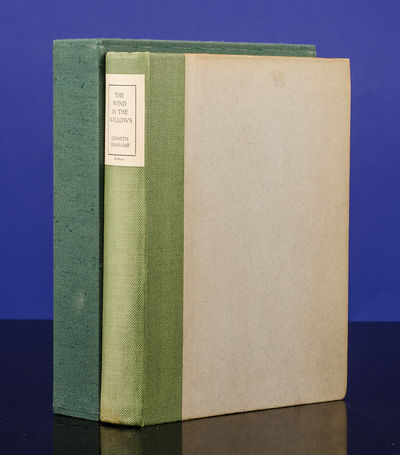 signed
by GRAHAME, Kenneth; Shepard, Ernest H.; Milne, A.A.; Fraser-Simson, H.
London: Methuen & Co., 1931. Signed Limited Edition of "The Wind in the Willows" GRAHAME, Kenneth. The Wind in the Willows. Illustrated by Ernest H. Shepard. London: Methuen & Co., [1931]. First edition illustrated by Shepard. (The first edition was published in 1908 with a frontispiece by Graham Robertson.) Limited to 200 numbered copies on handmade paper, signed the Kenneth Grahame and Ernest H. Shepard, this being No. 62. Small quarto (8 7/8 x 7 1/8 inches; 225 x 182 mm.). [2, blank], [6], 312 pp. Text illustrations. Folding map at end. Publisher's quarter green buckram over gray boards. Printed paper label on spine. All edges uncut. Engraved bookplate of Geoffrey Hunter-Brown and neat ink inscription "From Mother. April 2nd/32" on front paste-down. Some very light foxing on uncut edges only, minimal rubbing to corners, otherwise a fine copy housed in a green buckram slipcase. The Wind in the Willows, "one of the central classics of children's fiction, was Grahame's fourth book...It began life as a series of bedtime stories told to his son Alastair, known as Mouse...the first of these was told on Mouse's fourth birthday, 12 May 1904, and concerned 'moles, giraffes & water-rats', these being the animals the boy had selected for subject...Probably the stories continued at intervals over the next three years; certainly a lengthy narrative in which Toad played the principal part (and in which there were no giraffes) had been begun by May 1907. During that month Mouse was on holiday on the South Coast with his governess, Miss Stott, and his father wrote him a series of story-letters...The letters, some of which were addressed to 'Michael Robinson', Mouse's pet name for himself, continued every few days until September...they describe Toad's adventures much as in the published book, but pay no more that cursory attention to Rat, Mole, and Badger. The early ones...tell the tale abruptly in the manner of a synopsis, but by the end Grahame is writing the story at its proper pace, with dialogue and detailed, carefully-written narrative. It seems that his decision to try to get it published was the result of meetings with Constance Smedley, an American lady who among other things was European representative of the magazine Everybody's. Its editor asked her to try to persuade Grahame to produce a new book...she went to see him, somehow discovered about the story being told to Alastair, and encouraged him to work it up for publication...The book was not accepted by Everybody's, Miss Smedley's magazine, and indeed Grahame's agent Curtis Brown had great difficulty in placing it at all. But it was finally taken in England by Methuen, who published it in Oct. 1908...The Wind in the Willows was not at first a success with the public. Many readers who were devoted to The Golden Age and Dream Days were disconcerted to find that the new book was not about children but animals. Almost no reviewer perceived anything of its purpose...Despite the disappointing reception, sales were high enough for Methuen to reprint the book before the end of 1908, and further reprints were issued in 1909, 1910, 1911, and 1913. By 1926 it was in its 21st printing, and when Graham died six years later his name had become associated far more with The Wind in the Willows than with his earlier successes." (The Oxford Companion to Children's Literature). (Inventory #: 04723)
$4500.00 add to cart or Buy Direct from
David Brass Rare Books
Share this item

History of Parliamentary Elections and Electioneering in the Old Days, A.