Wonder-Book for Girls and Boys, A. 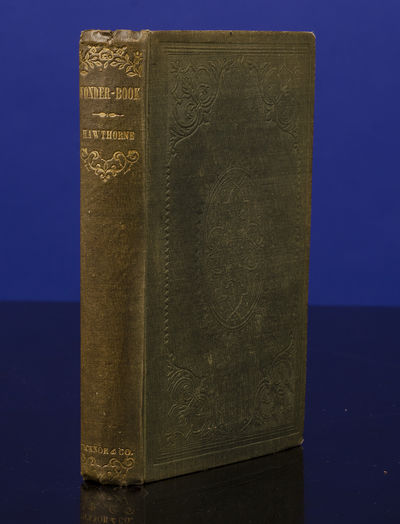 first edition
by HAWTHORNE, Nathaniel
Boston: Ticknor, Reed, and Fields, 1852. First Edition, First Printing of Nathaniel Hawthorne's Most Famous Children's Book Six Tales Adapted from Greek Myths HAWTHORNE, Nathaniel. A Wonder-Book for Girls and Boys. With engravings by Baker from designs by Billings. Boston: Ticknor, Reed, and Fields, 1852. First edition, first printing, with the misprint "lifed" for lifted" on p. 21, line 3. Small octavo (6 5/8 x 4 3/8 inches; 169 x 111 mm.). [2, flyleaf], [i]-vi, [7]-256, [2, flyleaf] pp. Frontispiece and six inserted engraved plates after designs by Hammat Billings, all with original tissue-guards. Original gray-green, vertically ribbed cloth, covers stamped in blind, spine lettered in gilt, pale yellow wove endpapers. Some occasional and minimal light marginal soiling. Spine extremities expertly and almost invisibly strengthened (only visible under ultra-violet light), minimal rubbing to corners. Original endpapers and hinges untouched. A wonderful example of this superb collection of six children's tales adapted from Greek myths. First Edition, first printing, of this collection of six children's tales adapted from Greek myths. Although dated 1852 on the title-page, A Wonder-Book for Girls and Boys was actually published in November 1851. 3,067 copies were printed, of which 100 were distributed for review and the other 2,967 earned Hawthorne a 15% royalty on the 75-cent price. A second printing was ordered almost immediately, in December 1851, also dated 1852 - but with the misprint on p. 21 corrected. Although Hawthorne had written a number of histories, biographies and morals for children prior to the publication of The Scarlet Letter in 1850, these early stories were primarily undertaken as hack-work and published in periodicals. Following the success of The Scarlet Letter, Hawthorne attempted to capitalize on his fame with two intended money-makers, A Wonder-Book and Tanglewood Tales, in 1853. Both were very popular and have since been celebrated for their retelling of myths for children. Includes six tales: "The Gorgon s Head," "The Paradise of Children," "The Three Golden Apples," "The Miraculous Pitcher," and "The Chimaera," as well as Hawthorne s version of the King Midas tale, "The Golden Touch." The popular success of A Wonder-Book led Hawthorne to publish another volume of children s stories in 1853, Tanglewood Tales. In his introduction to that book, he wrote "Children possess an unestimated sensitivity to whatever is deep or high, in imagination or feeling, so long as it is simple, likewise. It is only the artificial and the complex that bewilders them." Hawthorne wrote A Wonder-Book immediately after The House of the Seven Gables. That novel had sold 6,710 copies by August 1851, and A Wonder-Book sold 4,667 copies in just two months after its November 1851 publication. By comparison, his friend Herman Melville's novel Moby-Dick was released the same month, with the British edition selling under 300 copies in two years, and the American edition under 1,800 in the first year. BAL 7606; Clark A18.1.a; Grolier Hawthorne 25; Peter Parley to Penrod, p.6. (Inventory #: 04713)
$2,500.00 add to cart or Buy Direct from
David Brass Rare Books
Share this item