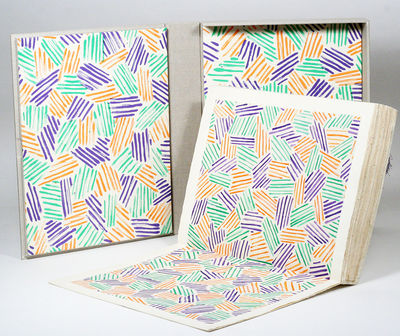 by JOHNS, JASPER; BECKETT, SAMUEL
London, Paris, New York: Editions de Minuit and Petersburg Press S.A., 1976. First edition. Wrappers and box. Fine. ONE OF THE MOST CELEBRATED ART BOOKS OF THE 20TH CENTURY: SIGNED LIMITED FIRST EDITION, SIGNED BY JASPER JOHNS AND SAMUEL BECKETT. ONE OF ONLY 250 COPIES, (from a total edition of 300). "Two of the most enigmatic artists of our time, Samuel Beckett and Jasper Johns, collaborated on this complex yet elegant artist's book. Originally written in French..., the brooding essays were rewritten in English by Beckett for this project. Nevertheless, Johns decided to include both texts that expanded his own involvement to thirty-three etchings and aquatints plus color lithograph endpapers. Johns's imagery is based on a major four-panel painting, Untitled (1972), along with his classic imagery related to numbers and body parts. This cerebral volume that provokes more questions than it answers is considered one of the greatest artists' books of the second half of the twentieth century" (Johnson and Stein, Artists' Books in the Modern Era 1870-2000). Included in the landmark 1995 Museum of Modern Art exhibit: A Century of Artists' Books.

Magnificently illustrated with original prints by Johns, with the complete set of 33 etchings and aquatints in- and hors-texte, including two double pages in colors. Printed on handmade wove Auvergne Richard de Bas paper watermarked with Beckett's initials and Johns's signature. Text in both French and English by Beckett.