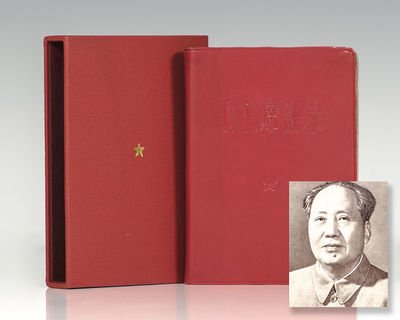 by Mao Zedong (Mao Tse-Tung or Zedung)
Beijing: Central Political Department of the Chinese People's Liberation Army, 1964. First edition of Quotations from Chairman Mao. Duodecimo, in the original iconic red vinyl, title to front cover in blind, frontispiece portrait of Chairman Mao. With the textual error on pp. 82/83 corrected and Lin Biao's calligraphic endorsement leaf after the frontispiece tipped in from a later printing. In 1972, an edict was issued that Lin's name was to be obliterated from history, following disclosures that he had plotted a coup and planned to assassinate Mao; consequently, "many surviving copies in the Chinese language have that page legitimately torn away, mutilated or censored" (Schiller, p. 36). In near fine condition. Housed in a custom red slipcase. Printed for the General Political Department of the People's Liberation Army, the first edition of Mao's Quotations, was issued in two states and bindings: the uncorrected first state text in red vinyl plastic, and the corrected second state in paper wrappers. The corrected copies, issued in wrappers and intended for high-ranking officers, were released first; the uncorrected copies, issued in red vinyl and for use by brigade teams, were released shortly afterwards, as the sturdier binding took longer to manufacture. By the start of the Cultural Revolution in 1966, the red vinyl design had become symbolic of Mao's slogan "The East is Red", and the paper wrappers were discontinued. The year 1966 also "signaled the start of a major translation and publication project when the Little Red Book was issued in over 50 different languages of countries where Socialism might triumph" (Schiller, p. 55). The book was printed in large quantities until Mao's death in 1976; by the late 1970s, however, a change of government meant further circulation of the book was discouraged, with millions of copies were collected and destroyed. His Little Red Book, however, sometimes referred to as the "Chinese Bible", "forms a brilliant compilation that is still readable and admired today for its political theories and strategies" (ibid., p. 57). (Inventory #: 100159)
$6,800.00 add to cart or Buy Direct from
Raptis Rare Books
Share this item