The Ultimate Foundation of Economic Science. 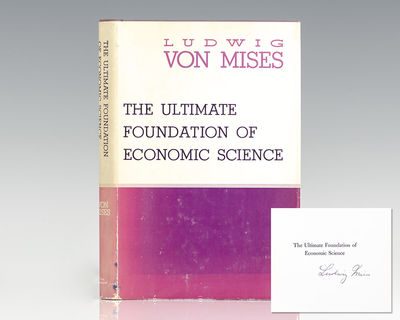 by von Mises, Ludwig
Princeton, NJ: D. Van Nostrand Company, Inc, 1962. First edition of von Mises' unheralded masterpiece. Octavo, original cloth. Signed by Ludwig von Mises on the half-title page. Fine in a very good price-clipped dust jacket. Written toward the end of Mises's life, his last monograph, The Ultimate Foundation of Economic Science, returned to economics as a science based on human action. Mises believed that, since the publication of Human Action, economists and scientists alike had misinterpreted the idea of economics as a science by deeming it epistemological positivism--that they believed that the "science" basis was still more rooted in philosophy than in actual science. In this volume, Mises argued that economics is a science because human action is a natural order of life and that it is the actions of humans that determine markets and capital decisions. Since Mises believed these links could be proven scientifically, he concluded that economics, with its basis on that human action, is indeed a science in its own right and not an ideology or a metaphysical doctrine. What has been described as his most passionate work, The Ultimate Foundation of Economic Science brings together all of the themes from Mises's previous works to proclaim what Israel Kirzner calls "the true character of economics. (Inventory #: 106744)
$6000.00 add to cart or Buy Direct from
Raptis Rare Books
Share this item