Anacreon, done into English out of the original Greek by Abraham Cowley and S.B. 1683. 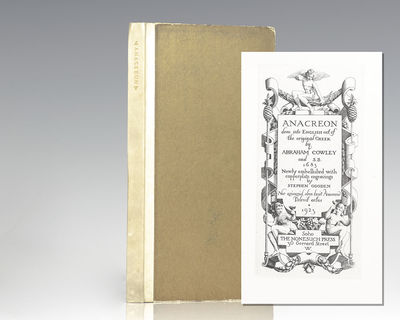 by Cowley, Abraham
Soho: Nonesuch Press, 1923. First Nonesuch Press limited edition of the Odes of Anacreon. Octavo, bound in three quarters vellum over gold paper-covered boards with gilt titles to the spine, illustrated with four full-page tissue-guarded copperplate engravings of Cupid, Bathyllus, Europa, & Venus, headpieces, and tailpieces by Stephen Gooden. One of only 725 copies produced, this is number 680. In very good condition. Founded in 1922 in London by Francis Meynell, his second wife Vera Mendel, and their mutual friend David Garnett, The Nonesuch Press was established in the basement of Garnett's bookshop in Soho. Nonesuch was unusual among private presses in that it used a small hand press to design books and then had them printed by commercial printers. Among the press's best-known editions were the collected works of William Congreve and William Wycherley and translations of Cervantes and Dante. Originally published in 1686, Bernard le Bovier de Fontenelle's Conversations on the Plurality of Worlds is considered to be one of the first major works of the Age of Enlightenment, offering an explanation for the heliocentric model of the Universe, suggested by Nicolaus Copernicus in 1543. (Inventory #: 100305)
$125.00 add to cart or Buy Direct from
Raptis Rare Books
Share this item