Human Action: A Treatise on Economics. 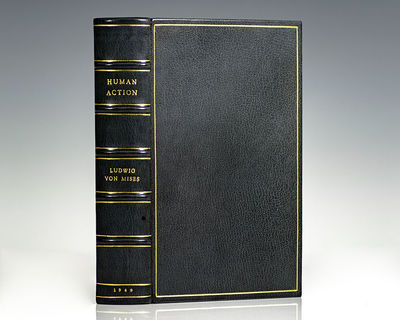 by Von Mises, Ludwig
New Haven: Yale University Press, 1949. First edition of von Mises' magnum opus. Octavo, bound in full morocco, gilt titles to the spine, raised bands, gilt ruled to the front and rear panels, all edges gilt, marbled endpapers. Some marginalia to the text, in near fine condition. A very nice presentation. Human Action is the single most important work by Von Mises and one of the most influential economic works of the twentieth century. "It should become the leading text of everyone who believes in freedom, in individualism, and in the ability of a free-market economy not only to outdistance any government-planned system in the production of goods and services for the masses, but to promote and safeguard . . . those intellectual, cultural, and moral values upon which all civilization ultimately rests" (Henry Hazlitt). (Inventory #: 105944)
$2,000.00 add to cart or Buy Direct from
Raptis Rare Books
Share this item