The Lightness of Being: Mass, Ether, and the Unification of Forces. 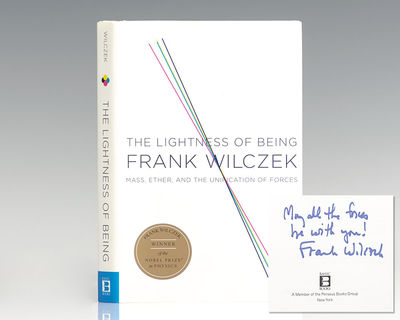 by Wilczek, Frank
New York: Basic Books, 2008. First edition of this "thrilling read... a glimpse of physics at its quirkiest and most illuminating" (The Economist). Octavo, original half cloth. Signed by the author on the title page, "May all the forces be with you! Frank Wilczek." Fine in a fine dust jacket. Jacket design by Rodrigo Corral. Also, laid in is a photograph signed by Frank Wilczek. Our understanding of nature's deepest reality has changed radically, but almost without our noticing, over the past twenty-five years. Transcending the clash of older ideas about matter and space, acclaimed physicist Frank Wilczek explains a remarkable new discovery: matter is built from almost weightless units, and pure energy is the ultimate source of mass. He calls it "The Lightness of Being." Space is no mere container, empty and passive. It is a dynamic Grid-a modern ether- and its spontaneous activity creates and destroys particles. This new understanding of mass explains the puzzling feebleness of gravity, and a gorgeous unification of all the forces comes sharply into focus.The Lightness of Being is the first book to explore the implications of these revolutionary ideas about mass, energy, and the nature of "empty space." In it, Wilczek masterfully presents new perspectives on our incredible universe and envisions a new golden age of fundamental physics. "Frank Wilczek is one of the most brilliant practitioners of particle physics...He writes as he thinks, with a lightness of touch that can come only to one who is absolute master of his subject" (Freeman Dyson, New York Review of Books). (Inventory #: 106758)
$300.00 add to cart or Buy Direct from
Raptis Rare Books
Share this item

The Sound of Music:

New York : Random House , 1960
(click for more details about The Sound of Music:)
View all from this seller>