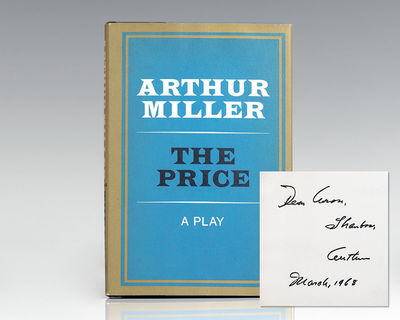 by Miller, Arthur
New York: The Viking Press, 1968. First edition of this play by the Pulitzer Prize-winning playwright. Octavo, original cloth. Association copy, inscribed by the author to his editor on the front free endpaper, "Dear Aaron Thanks Arthur March, 1968." Asher also edited Saul Bellow, Philip Roth and many others. Near fine in a near fine dust jacket. Jacket design by Mel Williamson. The Price is about family dynamics, the price of furniture and the price of one's decisions. The play premiered on Broadway in 1968, and has been revived four times on Broadway. It was nominated for two 1968 Tony Awards. (Inventory #: 105622)
$1,250.00 add to cart or Buy Direct from
Raptis Rare Books
Share this item

The Clicking of Cuthbert.

London : Herbert Jenkins , 1926
(click for more details about The Clicking of Cuthbert.)

To the Ends of the Earth: A Sea Trilogy [Rites of Passage, Close Quarters and Fire Down Below].

London : Faber and Faber , 1991
(click for more details about To the Ends of the Earth: A Sea Trilogy [Rites of Passage, Close Quarters and Fire Down Below].)
View all from this seller>