Manuscript on paper, entitled on label of upper cover "Myaku sho sasunomiko" ("Medical Teachings on the Pulse from the Child of God. One Volume") 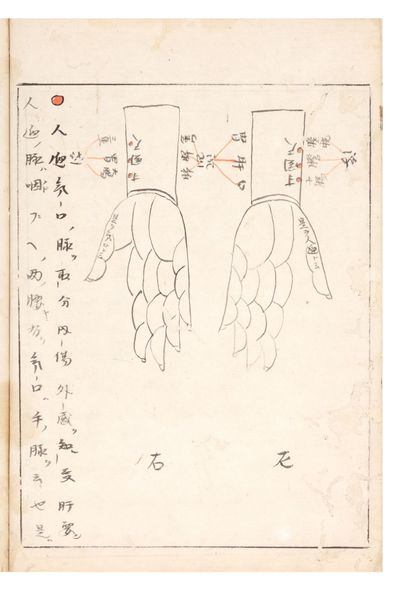 by MANASE, Dosan
One brush & ink illus. in the text. 9; 7 folding leaves. 8vo (230 x 168 mm.), orig. wrappers (text rather wormed with some relative minor loss of text, carefully repaired), new stitching. [Japan: early mid-Edo]. A most interesting collection of texts based on Chinese writings on the pulse. "Dosan Manase (1507-1594 or 95), [was] perhaps the most famous of the early Japanese physicians, and prolific writer in the entire field of medicine as then practiced in Japan."-Mestler, Old Japanese Medical Books, I, p. 300. His writings covered all aspects of medicine, including a treatise on diagnosing disease by taking the pulse. Manase "became a pivotal figure in the history of Japanese medicine. In his private academy, called Keitekiin, he devoted himself to making the whole system of [Chinese] Li and Chu medicine intelligible to several hundred students through clear and concise explanations...Dosan had many able followers who excelled in theory, practice, and education."-Sugimoto & Swain, Science & Culture in Traditional Japan, p. 216. This manuscript is divided into two parts. The first nine leaves are concerned with the theory of the pulse and its importance in diagnosis. The illustration depicts two hands and their wrists with the six locations for pulse taking and their relations to individual organs and the whole body. Part II is entitled "Myakuyaku kanryaku no hiji sasunomiko" ("The Theory of the Pulse Clarified and Organized by the Child of God"). We learn from the final leaf that this section was based on secret lectures of Genshin (or Dosaku) Yamawaki (1591-1678), who was a disciple of the teachings of Dosan Manase. Regarding the "Child of God": it implies the credibility and enormous importance the writers attached to the knowledge expressed in this manuscript. In spite of the repaired worming, in very good condition. (Inventory #: 6839)
$3,500.00 add to cart or Buy Direct from
Jonathan A. Hill, Bookseller
Share this item
Jonathan A. Hill, Bookseller, Inc.
Offered by


(click for more details about Backworks? Catalogue No. B, $1. Performance: Photographs of a Decade 1959-69)
View all from this seller>