A large collection of about 200 highly accomplished drawings, ranging from sketches to extremely finished drawings, accompanied by ca. 140 artist's proofs, some corrected in red 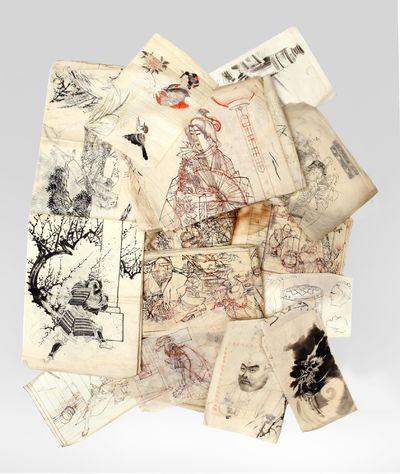 by TSUTSUI, Toshimine, artist
Brush, pen (?), & ink, many with background underdrawings in red ink. Approximately 200 drawings, ranging from 350 x 260 mm. to ca. 230 x 165 mm., all on fine tissue paper, many of the drawings bound in three large & two smaller albums, and some loose; three bound albums of artist's proofs. Occasional minor staining, but in fine condition. Several are signed by Tsutsui & dated, a few with his printed seal. [Japan: late Meiji]. An important archive of drawings and artist's proofs by Tsutsui, a leading kuchi-e artist. The fine drawings in this collection extend well beyond the kuchi-e genre and include the artist's work for magazines and newspapers. Many of the illustrations depict the problems and dilemmas caused by the rapidly changing world of Meiji Japan. A good number of the drawings are satirical or political. Tsutsui (1863-1934), was born Yuzo Tsutsui in Hyogo Prefecture. A student of the famous Yoshitoshi, Tsutsui is best known for his work as a kuchi-e artist during the Meiji period, but his oeuvre extended well beyond that. Kuchi-e, literally "mouth pictures," refers to woodblock illustrations created as frontispieces for romance novels, literary magazines, and newspapers. These illustrations often portrayed delicate and romantic bijin (beautiful women), printed with elegant and meticulous technique. Tsutsui also contributed illustrations to the literary magazine Bungei kurabu and regularly designed for the famous newspaper Jiji shinpo, from 1894 until the close of the Meiji period in 1911. He resided in Osaka and Tokyo. Tsutsui's drawings are represented in the Metropolitan Museum of New York, Freer and Sackler Galleries of the Smithsonian, the Honolulu Museum of Art, etc. A few minor stains, but in fine condition. (Inventory #: 6844)
$6,500.00 add to cart or Buy Direct from
Jonathan A. Hill, Bookseller
Share this item
Jonathan A. Hill, Bookseller, Inc.
Offered by