THE CRUISE OF THE CORWIN 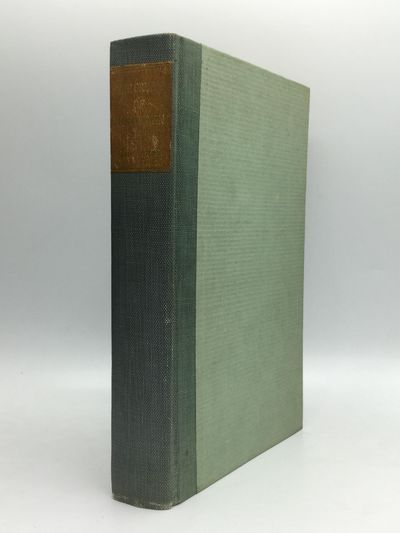 by Muir, John (1838-1914)
Boston and New York: Houghton Mifflin Company, 1917. First Edition. Hardcover. Near fine. Large Paper Edition, this is number 129 of 550 copies. This copy comes from the library of Lucretia Thatcher Perry Osborn (1858-1930), with her bookplate to the front pastedown and a holographic note in her hand on the front flyleaf ("This narrative is one of John Muir's earliest, chiefly written from his diary of the North"). Lucretia and her husband, American paleontologist Henry Fairfield Osborn (1857-1935), were close friends and benefactors of John Muir. Henry accompanied Muir on his fifth trip to Alaska (1896) and later, Muir spent time at the couple's summer house in Garrison, New York working on the final proofs of The Yosemite (1912). A fantastic association. In addition to its regular arctic duties as a United States Revenue Service Cutter, the Corwin steamed out of San Francisco Bay on May 4, 1881 with orders to search for the American polar exploration vessel Jeanette which had not been heard from since 1879. Muir shipped onboard as a naturalist and correspondent for the San Francisco Daily Bulletin, and this work consists of the 21 letters that he wrote to the Bulletin during the more than five-month voyage, supplemented with notes from his daily diary, and the two scientific reports on botany and glaciation that he wrote for the government. Muir was a gifted journalist with a reporter's instinct for the dramatic. Filled with colorful details of the arctic natives and their customs, the stark landscape, and frequently perilous adventures in an inhospitable and hazardous environment, his despatches were eagerly read by a large audience. Edited by William Frederic Bade (1871-1936). Hand-colored photogravure frontispiece, with 26 plates consisting of one map, eleven halftone reliefs from photographs, eight halftone reliefs from sketches by Muir, and six line blocks from drawings by Muir. Octavo. Original green laid paper covered boards, with a green cloth spine and a brown leather spine label stamped in gold. Partially unopened. An especially crisp and bright example. Later bookplate to a prefatory blank leaf. The spine is lightly faded along the spine, with a tiny bit of wear to the spine heel and some very mild rubbing to the rear board. Kimes 347. (Inventory #: 69840)
$800.00 add to cart Available from Johnson
Share this item

NATURE'S HARMONIC UNITY: A Treatise on Its Relation to Proportional Form

New York and London : G.P. Putnam's Sons , 1912
(click for more details about NATURE'S HARMONIC UNITY: A Treatise on Its Relation to Proportional Form)

TRUE NORWEGIAN BLACK METAL: We Turn in the Night Consumed by Fire

Brooklyn, New York : Vice Books , 2008
(click for more details about TRUE NORWEGIAN BLACK METAL: We Turn in the Night Consumed by Fire)
View all from this seller>