THE STRUCTURE AND DISTRIBUTION OF CORAL REEFS 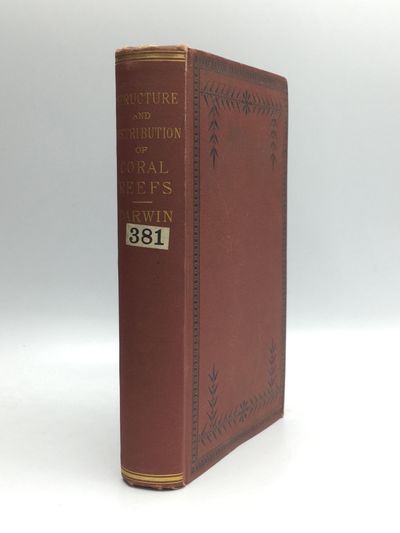 by Darwin, Charles
New York: D. Appleton and Company, 1889. Hardcover. Good. Third edition, with an appendix by Prof. T.G. Bonney, D.Sc., F.R.S., F.G.S. 344 p. with three folding plates and the publisher's ads. Octavo. Original brown cloth binding, with decorative gilt and black stamping. An ex-library copy with minimal markings: a bookplate to the front pastedown and a small numeric label to the spine. Minor creases to the folding plates. The top edge is a trifle dust stained, with some mild foxing to the fore-edge. There is also a small bit of rubbing to the corners and tips. From the library of the esteemed American paleontologist Stephen Jay Gould (1941-2002). In his essay "Worm for a Century" from the collection Hen's Teeth and Horse's Teeth: Further Reflections in Natural History (1983), Gould argued that this, Darwin's first book on a specific subject, is essential to understanding his theoretical approach: "This book is about coral, but it is also about historical reasoning. Vegetable mold formed fast enough to measure its rate directly; we capture the past by summing effects of small and observable present causes. But what if rates are too slow, or scales too large, to render history by direct observation of present processes? For such cases, we must develop a different method. Since large-scale processes begin at different times and proceed at diverse rates, the varied stages of different examples should exist simultaneously in the present. To establish history in such cases, we must construct a theory that will explain a series of present phenomena as stages of a single historical process. The method is quite general. Darwin used it to explain the formation of coral reefs. We invoke it today to infer the history of stars. (Inventory #: 69842)
$750.00 add to cart Available from Johnson
Share this item

THE WRECK OF THE MARY DEARE

New York : Alfred A. Knopf , 1956
(click for more details about THE WRECK OF THE MARY DEARE)

New York : Alfred A. Knopf , 2007
(click for more details about AFTER DARK)
View all from this seller>