[The Canterbury Tales: the Tale of Melibee]. 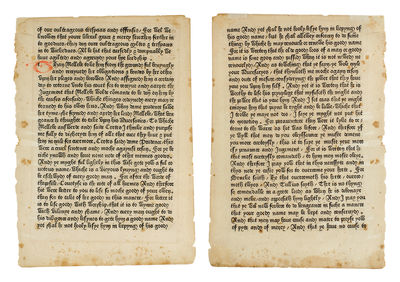 by Chaucer, Geoffrey.
Single leaf [292 r/v]. [Westminster: William Caxton, 1476-1477]. Single leaf [292 r/v], (242 x 163 mm), printed on both sides, with a single rubricated initial. Bull's Head watermark clearly visible in the center of the leaf when held against light. Not trimmed close to the text as our previous copy and virtually all known fragments. Sympathetically cleaned and matted. § A landmark in the history of English literature, and in the history of printing, being a single leaf from Chaucer's Tale of Melibee from the Canterbury Tales, the second tale told by Chaucer himself as the host of the inn in which the pilgrims lodge. This particular leaf is significant as it includes a Biblical citation which may be the first appearance in English of the proverb "Greed (i.e. money) is the root of all harms (i.e. evil)". "For according to the saying of the word of the Apostle, `Greed is root of all harms.' And therefore it were better for you to lose so much wealth of your own than to take their wealth in this manner, for better it is to lose wealth with honor than it is to acquire wealth with villainy and shame."“Caxton was both the first to print a book in English, and the first English printer. He realized the commercial potential of the new technology while working as a merchant in the Low Countries and Germany, birthplace of printing in Europe. Around 1475, Caxton set up his own printing press in London. Among his earliest books are two magnificent editions of the 14th-century classic, Chaucer’s ‘Canterbury Tales’: the first published in 1476 AND THUS THE FIRST BOOK PRINTED IN ENGLAND IN ENGLISH and the second, illustrated with woodblock prints, in 1483.” British Library).See: ic00431000. 9 essentially complete If sometimes made-up) copies and 5 substantial but incomplete copies are listed by location, along with 24 single leaves, or groups of a very few (2-8) leaves. The copy listed as owned by Norman Strouse was later sold to Bernard M. Rosenthal from whom we bought it in 2014 and sold it to the St. Louis Mercantile Library. It was the last leaf to be sold in the trade to our knowledge and, like most leaves but not this one, was trimmed at the top touching the text. Even the Doheny fragments were trimmed touching the text at the top. The Caxton Club issued a book about Caxton and 148 copies included an original leaf. (Inventory #: 122957)
$12,500.00 add to cart or Buy Direct from
John Windle, Bookseller
Share this item

Our Army at Monterey.

Philadelphia : Carey and Hart , 1847 [pictorial title dated 1848
(click for more details about Our Army at Monterey.)

The Golden Hind A Quarterly Magazine of Art and Letters. Vol. 2 No. 8.