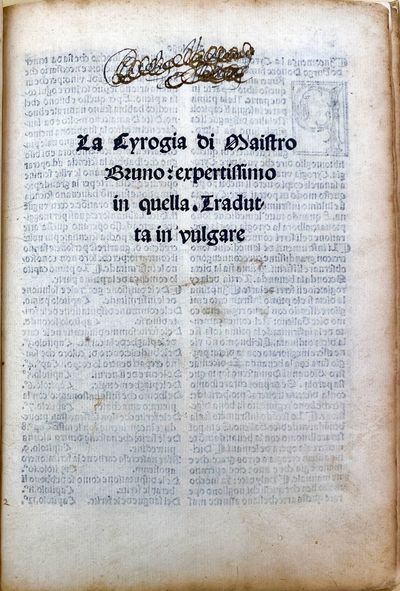 by Bruno da Longoburgo
Venice: per Simone de Luere, 1510. Bruno da Longoburgo (1200-1286). La cyrogia di Maistro Bruno: Expertissimo in quella. Tradutta in vulgare. 4to. 40ff. Venice: Simon de Luere, 17 June 1510. 201 x 144 mm. Early vellum, author's name in ink on the spine, endpapers renewed. Small wormholes in last 10 leaves filled in, short ink inscription (deleted) on title, light browning at edges but very good. First and Only Separate Edition, and Only Edition in the Vernacular, of One of the Earliest European Surgical Treatises. Extremely rare, with only three copies noted in OCLC (U. Iowa, Harvard, NLM) and two in Italian libraries (Pistoia and Bologna). Bruno da Longoburgo studied surgery in Bologna or possibly Padua, and practiced in the latter city, where he helped found the University of Padua. His Chirurgia magna, completed in 1252, antedates those of Lanfranch, Henri de Mondeville, Guy de Chauliac and Gulielmo da Saliceto, even though it did not appear in print until the end of the fifteenth century, when it was included in the Chirurgia magna (1498) of Guy de Chauliac. It was never again published separately, or in a modern language. Bruno's Chirurgia magna was the first surgical treatise of its time to draw upon the works of Arabic authors, primarily Albucasis. The work is divided into two books of twenty chapters each: The first book deals with wound surgery, fractures and the nerves, while the second book discusses the surgery of specific parts (eyes, nose, lips, ears), the treatment of burns, and conditions such as hernia, cancer and bladder stones, as well as operations on the teeth and the antrum of Highmore (maxillary sinus). Bruno was "an experienced surgeon, and refer[red] many times to his own observations" (Sarton, Introduction to the History of Science, 2, p. 1077). . (Inventory #: 45129)
$25,000.00 add to cart or Buy Direct from
Jeremy Norman & Co.
Share this item
Jeremy Norman & Co., Inc.
Offered by