The Free and Prosperous Commonwealth: An Exposition of the Ideas of Classical Liberalism. 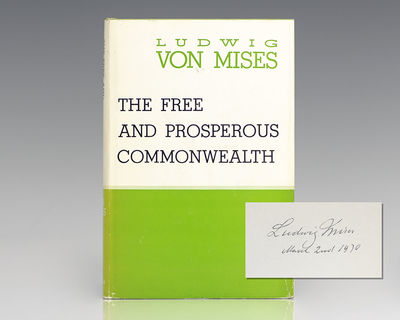 by von Mises, Ludwig
Princeton, NJ: D. Van Nostrand Company, Inc, 1962. First edition of this classic work by von Mises. Octavo, original cloth. Signed and dated by the author on the front free endpaper, "Ludwig Mises March 2nd 1970." Near fine in very good dust jacket. Translated by Ralph Raico. Edited by Arthur Goddard. Originally published as in German as Liberalismus is a book by von Mises, containing economic analysis and indicting critique of socialism. It was first published in 1927 by Gustav Fischer Verlag in Jena and defending classical liberal ideology based on individual property rights. Starting from the principle of private property, Mises shows how the other classical liberal freedoms follow from property rights and argues that liberalism free of government intervention is required to promote peace, social harmony and the general welfare. (Inventory #: 106574)
$5,500.00 add to cart or Buy Direct from
Raptis Rare Books
Share this item