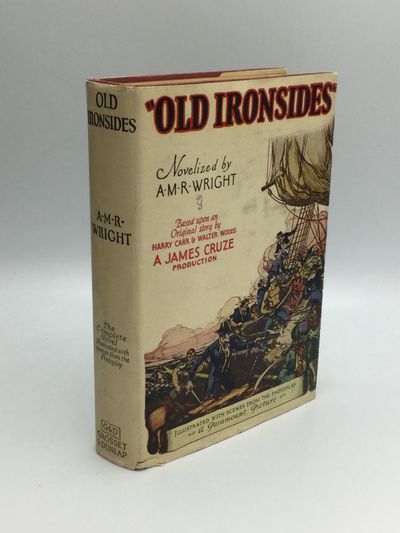 by [ Karloff, Boris ] Wright, A.M.R.
New York: Grosset & Dunlap, 1926. First Edition. Hardcover. Very good/Very good. Illustrated with scenes from the photoplay, based upon an original story by Harry Carr and Walter Woods, a James Cruze Production, a Paramount Picture. The feud between the U.S. Navy and the Barbary pirates serves as the backdrop for this 1926 silent film, which starred Charles Farrell, Esther Ralston, Wallace Beery, and George Bancroft. It is perhaps best remembered for its supporting cast, which included Richard Arlen, Duke Kahanamoku, and Boris Karloff. Appearing for a total of three seconds in a medium two-shot, Karloff, as a Saracen pirate, utters one line (shown on a title card). He appeared in several other uncredited bit parts prior to his iconic role as the monster in James Whale's Frankenstein (1931). Inscribed by Boris Karloff and Richard Arlen, respectively, to studio publicist Art Ronnie on the front flyleaf. Octavo. Original burgundy cloth binding, with pictorial black stamping. The spine is very lightly sun faded, with some mild wear to the corners and tips. In the original pictorial dust jacket, which is remarkably clean and bright. (Inventory #: 69843)
$1200.00 add to cart Available from Johnson
Share this item

APOLLO: The Wind, the Spirit, and the God - Four Studies