SLAVERY: ITS ORIGIN, NATURE AND HISTORY. ITS RELATIONS TO SOCIETY, TO GOVERNMENT AND TO TRUE RELIGION, --- TO HUMAN HAPPINESS AND DIVINE GLORY. CONSIDERED IN THE LIGHT OF BIBLE TEACHINGS, MORAL JUSTICE, AND POLITICAL WISDOM 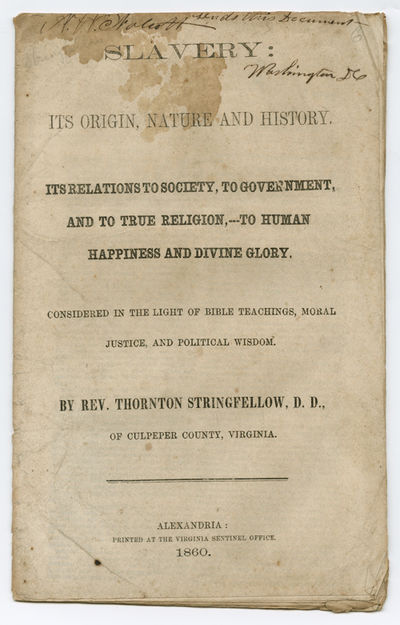 by Stringfellow, Thornton, Rev.
Alexandria, [Va.]: Virginia Sentinel Office, 1860. 32pp., printed in double columns. Printed self-wrappers, stitched as issued. Contemporary gift inscription on front wrapper. Old stain in upper portion of front wrapper, some moderate staining in text, outer corners dog-eared. Overall, good. Written by the pastor of Culpeper County, Virginia on the eve of the Civil War, this work defends and justifies slavery with arguments typical to southerners at the time, and demonizes northern abolitionists. Stringfellow plucks the expected notes of African-American intellectual inferiority, and also claims that the enslaved are in fact blessed and happy to serve whites, especially compared to the squalor and indignity they would bring upon themselves if left to their own devices. Stringfellow further argues along theological lines, extensively combing both Testaments for examples of God's support of the institution of slavery. He also makes use of an argument with its origins in late medieval theology that claimed Ham, a son of Noah cursed to servitude by his father, was black and the father of the African race. HAYNES 17811. SABIN 92871. (Inventory #: WRCAM54983)
$250.00 add to cart or Buy Direct from
William Reese Co. - Americana
Share this item

London : Printed by Thomas Baskett...and by the Assigns of Robert Baskett , 1750
(click for more details about ANNO VICESIMO TERTIO GEORGII II...AN ACT FOR IMPROVING THE NAVIGATION OF THE RIVER LOYNE, OTHERWISE CALLED LUNE; AND FOR BUILDING A QUAY OR WHARF NEAR THE TOWN OF LANCASTER IN THE COUNTY PALATINE OF LANCASTER [caption title])

A PLAN OF THE TOWN OF NEWPORT. IN THE PROVINCE OF RHODE ISLAND

[London] : J.F.W. Des Barres , 1781
(click for more details about A PLAN OF THE TOWN OF NEWPORT. IN THE PROVINCE OF RHODE ISLAND)
View all from this seller>