THE CUTTING OF AN AGATE 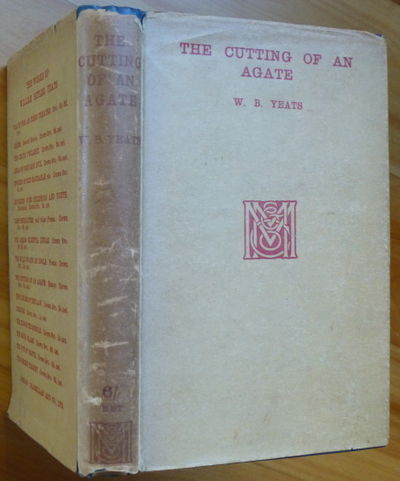 by Yeats, W.B.
1919. London: Macmillan and Co., 1919. Original blue cloth geometrically decorated in gilt (in orange on the spine), with dust jacket.

First English Edition of this collection of essays, which consisted of 1500 copies -- slightly changed from the 1912 American edition (one essay dropped, another added, new Preface). He writes (for example) about meeting fellow student J.M. Synge for the first time and thereafter, and about putting on plays in a small town in the west of Ireland. As Yeats says in his Preface, he wrote the majority of these essays "during the ten years after 1902"... During those years I wrote little verse and no prose that did not arise out of some need of the Irish players... I was busy with a single art, that of a small, unpopular theatre; and this art may well seem... of no more account than the shaping of an agate... This volume, with its handsome geometric design by T. Sturge Moore (initialed), is in fine condition; included is the uncommon dust jacket, in very good condition (spine darkened, light wear not affecting print at the extremities) -- still with the original "6/-" price on its spine. Wade 126. (Inventory #: 14428)
$675.00 add to cart or Buy Direct from
Sumner & Stillman
Share this item

1903
(click for more details about The Epic of the Wheat. THE PIT. A Story of Chicago)

1903
(click for more details about The Epic of the Wheat. THE PIT. A Story of Chicago)
View all from this seller>