THE HOUND OF THE BASKERVILLES 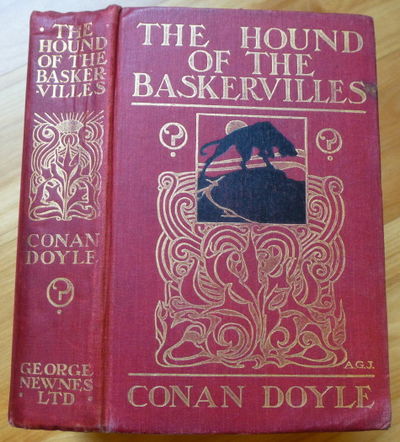 by Doyle, A. Conan
1902. Another Adventure of Sherlock Holmes. London: George Newnes, 1902. Original red cloth decorated in gilt and black.

First Edition of Doyle's famous full-length Sherlock Holmes novel, illustrated by Sidney Paget -- a tale Doyle himself termed "a real creeper." This was the first Sherlockian tale since Doyle had apparently killed Holmes off in "The Final Problem" of late 1893. However, since THE HOUND takes place chronologically before then, Doyle was not here officially "reviving" Holmes; this he would do the following year, when he wrote "The Adventure of the Empty House" -- which would be the first tale of THE RETURN OF SHERLOCK HOLMES in 1905. This copy is in very good-plus condition: there is a small worn spot at the fore-edge of the front cover, a few wrinkles in the upper spine, and a bit of the usual rubbing of cloth and gilt; other than some foxing on a few leaves near each end of the volume, the thick wove paper has held up well, and the endpapers are intact. (It appears that many decades ago someone affixed some grey paper near the upper end of the gatherings (inside the spine), but by now there is hardly any of it left, and the spine is as it should be -- the cloth floating free of the text block, but anchored securely by the intact hinges and joints.) All sixteen plates are of course present, and remain quite clean and sharp. Though THE HOUND was issued in considerable numbers, it is becoming difficult to find in truly advantageous condition. Green & Gibson A26a. (Inventory #: 14426)
$2,450.00 add to cart or Buy Direct from
Sumner & Stillman
Share this item