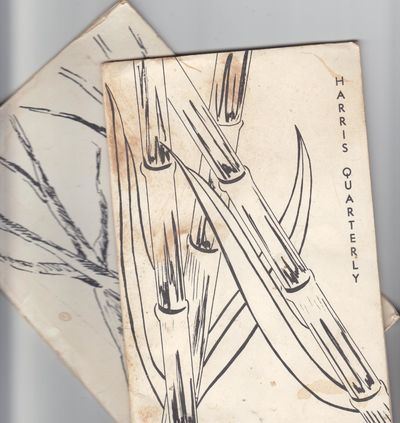 St Louis: Phi Beta Chapter of Sigma Tau Delta National English Fraternity. 1969 & 1971. First Printing. Periodical. Wraps, the 1969 issue has a bump and bad tear at top and bottom of spine, thus, good-; the 1971 issue is very good. Published at Harris Teachers College. Harris Teachers College was a teachers college for white students founded in 1857. The Summer Normal school for black teachers, founded in 1890, was renamed Stowe Teachers College in 1929 after Harriet Beecher Stowe. In 1954, after Brown v. Board of Education, the two schools were merged as Harris Teachers College, but not long after, the name was changed to Harris-Stowe College. In 1979, it was added to the state system and became Harris-Stowe State College. It expanded its program in many directions and became Harris-Stowe State University in 2005. Copies of the Harris Quarterly are quite uncommon. The African American content from this period is difficult to determine. ; 8vo 8" - 9" tall; 37; 35 pp . (Inventory #: 29560)
$50.00 add to cart Available from Beasley Books
Share this item

The Man With The Golden Gun

London : Jonathan Cape , 1965
(click for more details about The Man With The Golden Gun)
View all from this seller>