Psychology and the Stock Market: Investment Strategy Beyond Random Walk. 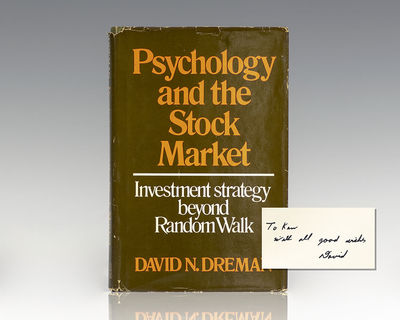 by Dreman, David N
New York: AMACOM, 1977. First edition of Dreman's first book. Octavo, original cloth. Association copy, inscribed by the author on the front free endpaper to close friend Keniston Merrill, "To Ken With all good wishes David." The recipient Keniston P. Merrill worked as a financial analyst for TIAA-CREF in New York City from 1957-1964. In 1965, he joined The Five Arrow's Fund as a financial analyst. Five Arrows later became New Court Securities and then Rothschild, Inc. where Ken rose to Managing Director. In 1982, Ken left Rothschild and joined National Life Insurance Company in Montpelier as Chief Investment Officer and President and Chief Executive Officer and a member of the Board of Directors of National Life Investment Management Company where he was responsible for managing the Sentinel family of mutual funds. With the recipient's name to the front free endpaper and his notes, near fine in a near fine dust jacket. An exceptional association copy. Psychology and the Stock Market provides a new departure for future security analysis through an exploration of the failure of the institutional money manager motivated by "groupthink", a psychological phenomenon which indicates that group participation directly affects individual decision-making - frequently in ways destructive to self-interest. (Inventory #: 106537)
$2,000.00 add to cart or Buy Direct from
Raptis Rare Books
Share this item