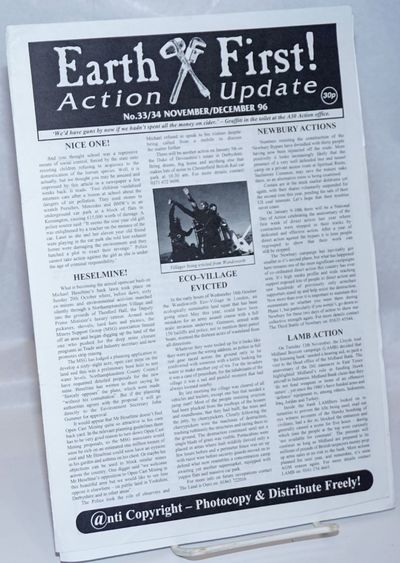 London: Earth First!, 1996. Single sheet folded to make [4]p., 8.25 x 11.75 inches, folded in thirds for mailing, address label (addressed to American anarchist magazine "Anarchy: A Journal of Desire Armed"), stamps, and remains of tape used to hold shut for mailing on rear wrap else very good condition. Two fliers laid in, one a list of EF! contacts and ways to support political prisoners, the other an open letter from the Campaign for Real Life criticizing the Job Seekers Alliance (A UK unemployment program) and the flier "JSA: So What?" which was included in the October issue of Action Update. (Inventory #: 244292)
$25.00 add to cart or Buy Direct from Bolerium Books
Share this item