Women and Revolution, Journal of the Women's Commission of the Spartacist League - 17 consecutive issues, 1973-1980 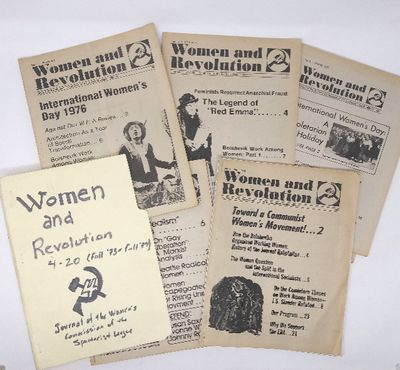 San Francisco and New York: Revolutionary Women of the Bay Area, Spartacist Publishing Company. Softcover. Very good. Issue numbers 4-20, all original but number 5, which is a photocopy. 8.5 x 11 inches, printed in black on newsprint; one issue 32 pp, the rest 24 pp, illustrated. Minor toning to extremities, stab holes from stapling at the left edge of some issues, other issues still stapled to one another (from being made into a homemade bound volume); very good. Housed as found, in a file folder with title, date, and hammer and sickle symbol on the front in black magic marker. The Spartacist League was formed in 1962 after a split within the ranks of the Socialist Workers Party led to the expulsion of some members. The League also had strong ties to the Progressive Labor Party and the Students for a Democratic Society, but during the late 1960s and early 1970s these groups also differed about strategy and ideology, and the League eventually followed its own path. Women and Revolution, which was published from 1972-1996, began as a publication of Spartacist members and feminists in the San Francisco Bay Area who believed that the struggle against women's oppression was inseparable from the liberation of the working class from the yoke of capitalist society (Source: Wisconsin Historical Society). The early issues include much debate over the interconnections between the women's movement and class struggle. By the later 1970s, there is more coverage of specific actions of women's groups and the plight of women around the United States and internationally (e.g., articles on the radical women in Seattle, American women in the coal industry, black women in South Africa, Iranian women and revolution in Iran, the crisis of the women's movement in Australia). There are also a number of articles on historical women's activism, as well as current book and movie reviews. (Inventory #: 20670)
$300.00 add to cart or Buy Direct from Walkabout Books
Share this item

Report of the Operations of the U.S. Revenue Steamer Nunivak on the Yukon River Station, Alaska, 1899-1901

Washington : Government Printing Office , 1904
(click for more details about Report of the Operations of the U.S. Revenue Steamer Nunivak on the Yukon River Station, Alaska, 1899-1901)

The Old Spanish and Mexican Ranchos of Orange County [with Map]

Los Angeles : Title Insurance and Trust Company , 1950
(click for more details about The Old Spanish and Mexican Ranchos of Orange County [with Map])
View all from this seller>