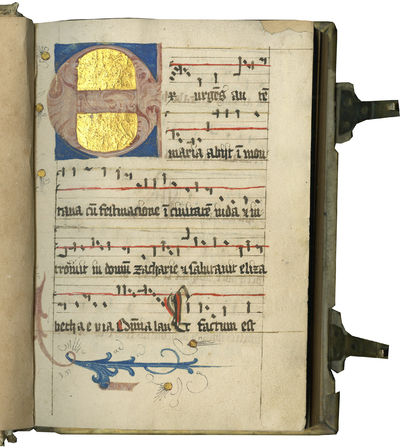 SIXTEENTH CENTURY NOTED BREVIARY WITH TEXTS FOR THE MASS AND COSMETIC RECIPES. In Latin and German, illuminated manuscript on paper, with musical notation, Southern or Central Germany, c. 1515-1525. Dimensions 200 x 140 mm., 114 folios, apparently complete, watermarks, written in black and red inks in textualis and cursive bookhands on 16 lines for text pages, for music 5 staves of four lines ruled in brown ink with hufnagelschrift notation, 2- to 5-line initials, two 3-line foliate initials, one 4-line foliate initial, one large foliate initial in pink on blue ground, in-filled in burnished gold. BINDING: CONTEMPORARY BINDING of pigskin over wooden boards, blind tooled, two brass clasps and catches. TEXT: An intriguing witness to the religious life in Germany during the early decades of the Reformation. This handsome manuscript features distinctive German musical notation known as Hufnagel ("horseshoe nail"). Alongside the Latin liturgical texts are texts for the Mass and recipes for make-up in German, opening the possibility of female ownership. PROVENANCE: The evidence of the language, script, style of the illumination, and watermark evidence support an origin in Southern or Central Germany, c. 1515-1325. Short sale catalogue entries in English and German pasted to the verso of the first front flyleaf. In 1884, the manuscript was offered to the Metropolitan Museum of Art (NY) by Joseph William Drexel (1833-1888) of Philadelphia; Drexel's donation was confirmed after his death in 1889. CONDITION: minor stains and smudging, minor wear of leather on spine of binding, otherwise in very good condition. (Inventory #: TM 947)
$45,000.00 add to cart Available from
Les Enluminures, Ltd.
Share this item
Les Enluminures, Ltd.
Offered by

Book of Hours (use of Rome); in Latin and French, illuminated manuscript on parchment

France, Bourges, c. 1490-1500
(click for more details about Book of Hours (use of Rome); in Latin and French, illuminated manuscript on parchment)
View all from this seller>