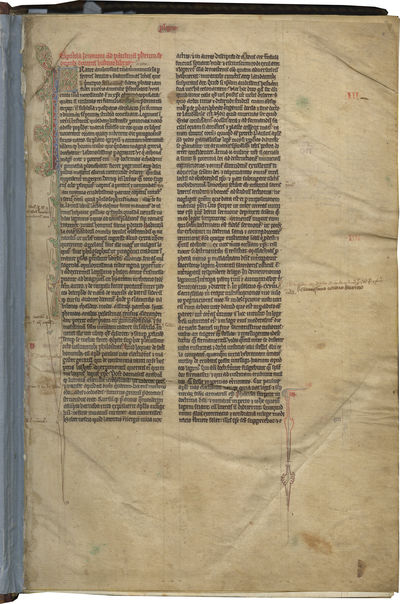 LARGE FORMAT EARLY THIRTEENTH CENTURY ENGLISH BIBLE OF CONSIDERABLE SCHOLARLY IMPORTANCE. In Latin, decorated manuscript on parchment, England, c. 1220-1230; c. 1230-1240. Dimensions 350 x 240 mm., 304 folios, missing leaf in Genesis, a quire with the end of Job and the Psalms, two leaves from Maccabees, layout varies, hand 1: written on the top line in a gothic bookhand in two columns in 57-56 lines, chapters begin with 1-line initials, prologues begin with 3- to 2-line initials, books begin with 5- to 13-line initials, hands 2-3: written by at least two scribes on the top line in upright gothic bookhands in two columns of 63-60 lines, 2- to 3-line initials before some prologues, 7- to 27-line initials before other prologues and biblical books. BINDING: eighteenth century brown leather over pasteboard, gold tooled with a narrow border at the edges. TEXT: An unusually large format, impressive Bible, undoubtedly of English origin, exemplifying the transitional nature of Bibles from the early thirteenth century. Noteworthy textual elements include the presence of both older and modern chapters and an extensive cycle of the apocryphal Ezra books. PROVENANCE: Everything about this manuscript, copied by several scribes in two sections each with their own style of decoration, supports an English origin. Later evidence of use in the first section includes marginal indications of liturgical readings and annotations in many hands. Inside front cover, cutting from a sales catalogue in English, lot 657. Laminated note, laid in, "Biblia sacra …. Loan from Dr. Gary Gorman." CONDITION: occasional stains, front and back flyleaves detached, front and back hinges reinforced with modern tape, signs of use throughout, but in overall good condition. (TM 973) (Inventory #: TM 973)
$160,000.00 add to cart Available from
Les Enluminures, Ltd.
Share this item
Les Enluminures, Ltd.
Offered by