Report on the Properties of the Fortuna Mining Company, Northern Sonora, Mexico. [with:] Facts and Figures [inside cover title] 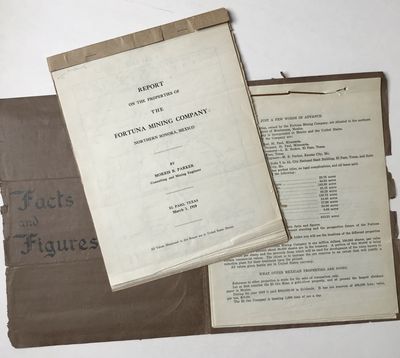 by [Mexico]. [Mining]
El Paso, 1910. About very good.. [7] leaves, plus five folding maps; [5] leaves, plus one folding map. Original plain paper wrappers, tied and stapled at top edge. Previously folded. Light wear and chipping at edges of wraps. Light tanning. A pair of rare early 20th-century reports on a Sonoran mining venture that was incorporated in Douglas, Arizona, and headquartered in El Paso, Texas. The Fortuna Mining Company owned and planned to develop a total of ten claims west of the small town of Bavispe in the Moctezuma District of Sonora. The first of these reports provides descriptions of the claims in question and describes the investment and development accomplished thus far. The first section of text describes the Tigre / Lucky Tiger mine, of which the text boasts that, "No property in the entire Southwest is better known," and then goes on to describe the actual holdings of the company, all in close proximity to the Lucky Tiger. Accompanying these descriptions are six maps, five folding, showing the area of the claims and detailed cross sections of the excavations at the time of publication and captioning text describing the planned work on each. One of these shows the "Lucky Tiger - Fortuna Mineral District," with the claims of Fortuna and two other neighboring companies shaded in red, blue, and yellow. The second work present here gives "Facts and Figures" regarding the Fortuna company, its investments, and its profitability in comparison with other operations in the immediate area. It goes on to assert that even with only preliminary work accomplished, the mines are already a profitable enterprise, and offers an expenses-paid trip to the diggings for inspection and evaluation by potential high-level investors. A second copy of the Fortuna District map is attached to this promotional. According to the first report, the Fortuna Mining Company was incorporated in 1903 in Douglas, Arizona. We locate one copy of a prospectus dated 1907 somewhat similar to the first work here, at UC San Diego, and none of the two present works. Rare promotionals for a Mexican mining venture. (Inventory #: 820)
$950.00 add to cart Available from
McBride Rare Books
Share this item