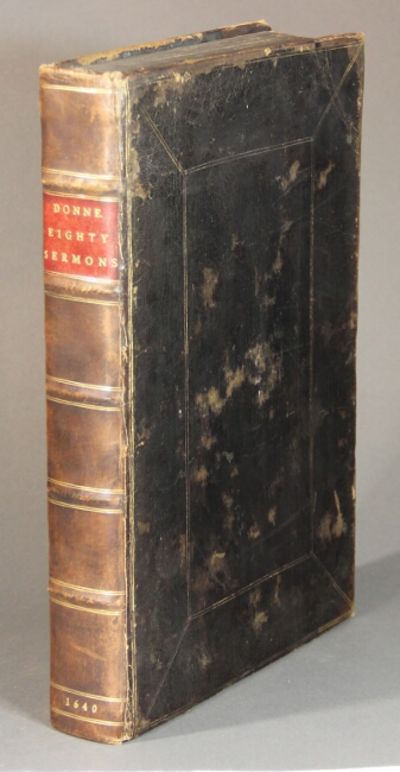 by Donne, John
London: printed [by Miles Flesher] for Richard Royston, and Richard Marriot, 1640. First edition of the first folio collection of Donne's sermons; folio, pp. [32], 826, [22]; initial and final blank leaves wanting; engraved additional architectural title with an oval portrait of Donne laid down (with "Ãtat: 42." in the frame, as usual); title page with woodcut printer's device (McKerrow 308); woodcut head- and tail-pieces and decorative initials; contemporary full paneled black goat with a 20th century rebacking in calf, gilt-ruled spine in six compartments with red morocco label in one; front hinge starting, minor board wear, occasional light spotting, short worm track in preface, very good. With the signatures of John Newton and a much later signature by a Thomas Ashwell, and a manuscript annotation at the end of preface. The preface is the first printing of Izaak Walton's classic Life of Donne. Keynes 29; STC 7038. (Inventory #: 54895)
$4,600.00 add to cart or Buy Direct from
Rulon-Miller Books
Share this item