I Married Adventure: The Life and Adventures of Martin and Osa Johnson. 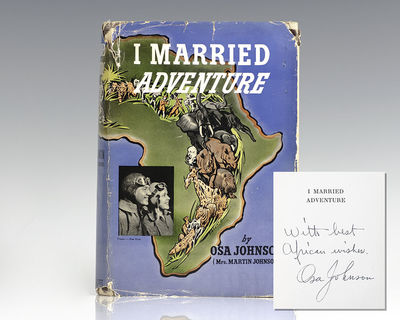 by Johnson, Osa
Philadelphia: J.B. Lippincott Company, 1940. First edition of Johnson's classic work. Octavo, original striped cloth, photographic endpapers illustrated with 83 aquatone illustrations. Boldly signed by the author on the half-title page, "With best African Wishes Osa Johnson." Bookplate to the front pastedown, near fine in the rare original dust jacket with some wear and rubbing. In the first half of the 20th century an American couple, Martin and Osa Johnson—from Lincoln, Kansas and Chanute, Kansas, respectively—captured the public's imagination through their films and books of adventure in exotic, faraway lands. Photographers, explorers, marketers, naturalists and authors, Martin and Osa studied the wildlife and peoples of East and Central Africa, the South Pacific Islands and British North Borneo. They explored then-unknown lands and brought back film footage and photographs, offering many Americans their first understanding of these distant lands. "Books of adventure are so numerous....[But] this one is unique. It has the human quality of a novel and the permanence of social history" (Katherine Woods, The New York Times). (Inventory #: 106737)
$550.00 add to cart or Buy Direct from
Raptis Rare Books
Share this item