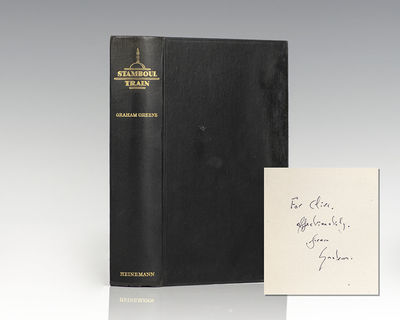 by Greene, Graham
London: William Heinemann, 1932. First edition, first printing with misplaced colon on p. 140 of Greene's first successful novel. Octavo, original cloth. Presentation copy, inscribed by the author on the front free endpaper, "For Clive affectionately from Graham." The recipient Clive Francis is a British actor, known for his roles in Stanley Kubrick's A Clockwork Orange, Inspector Clouseau and The Crown and was a friend of Greene's. In near fine condition. Set on an "Orient Express" train that ran from Ostend, Belgium, to Istanbul, Turkey, the book was renamed Orient Express when it was published in the United States. Greene in fact wrote three books before this one, but two were unsuccessful and he later disowned them, The Name of Action (1930) and Rumour at Nightfall (1932). Stamboul Train (1932) was Greene's first true success and it was taken on by the Book Society and in 1934 adapted as the film Orient Express. (Inventory #: 102754)
$5,000.00 add to cart or Buy Direct from
Raptis Rare Books
Share this item