A Man and His Presidents: The Political Odyssey of William F. Buckley Jr. 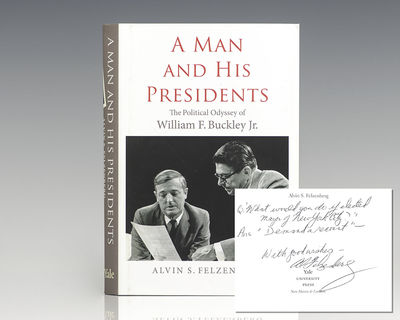 by Felzenberg, Alvin S
New Haven: Yale University Press, 2017. First edition of this "gracefully written and richly informative book" (Damon Linker, New York Times). Octavo, original boards. Signed by Alvin Felzenberg on the title page with the well-known quote from William Buckley, "Q. 'What would you do if elected mayor of New York City?' Ans. 'Demand a recount' - With good wishes - Al Felzenberg." Fine in a fine dust jacket. William F. Buckley Jr. is widely regarded as the most influential American conservative writer, activist, and organizer in the postwar era. In this nuanced biography, Alvin Felzenberg sheds light on little-known aspects of Buckley's career, including his role as back-channel adviser to policy makers, his intimate friendship with both Ronald and Nancy Reagan, his changing views on civil rights, and his break with George W. Bush over the Iraq War. (Inventory #: 104882)
$150.00 add to cart or Buy Direct from
Raptis Rare Books
Share this item