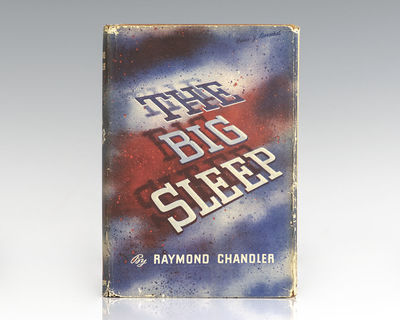 by Chandler, Raymond
New York: Alfred A. Knopf, 1939. First edition of Chandler's first and most famous novel, with the rarely found original dust jacket. Octavo, original cloth. Near fine in a near fine price-clipped dust jacket. Haycraft-Queen Cornerstone. Bruccoli A1.1.a. A very sharp example. The Big Sleep, Raymond Chandler's first novel, "was a masterpiece right out of the gate and introduced a new kind of detective story, build on the hard-boiled foundation laid by Dashiell Hammett" (Johnson I:44). The novel was published when Chandler was 51, after years of apprenticeship in pulp magazines. "It's my ambition," he once said, "to write a mystery story without one word of explanation at the end. In The Big Sleep I almost succeeded." This was the novel that announced Chandler's literary coming-of-age and defined the mythic status of his wise-cracking detective Philip Marlowe. "Chandler is fun to read," commented writer George Higgins. "He was also one hell of a writer, and those are hard to find" (Hardboiled Mystery Writers, 81-3). A Haycraft Queen cornerstone novel. William Faulkner co-authored the screenplay adaptation of The Big Sleep for Howard Hawks' 1946 film starring Humphrey Bogart and Lauren Bacall. (Inventory #: 105836)
$7,000.00 add to cart or Buy Direct from
Raptis Rare Books
Share this item