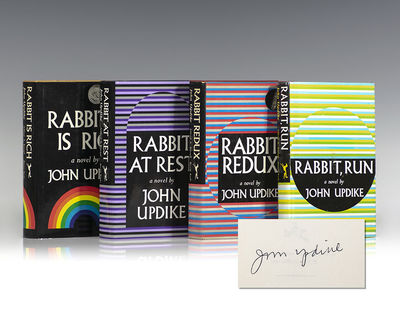 by Updike, John
New York: Alfred A. Knopf, 1960-1981. First editions of each volume in the Rabbit quartet. Octavos, 5 volumes, original half cloth. Each volume signed by John Updike, with Rabbit At Rest inscribed to noted book collector Rolland Comstock. Both Rabbit, Run. Each volume is near fine to fine in near fine to fine dust jackets. Jacket designs by John Updike. Jacket photographs by Alfred A. Knopf, Martha Updike, Andre Deutsche, Ellen Dahlberg, and Davis Freeman. A nice signed set. "Updikes choice of Rabbit Angstrom, in Rabbit, Run, was inspired, one of those happy, instinctive accidents that so often shape a literary career" (Books of the Century, 450). "Taken together, this quartet of novels has given its readers a wonderfully vivid portrait of one Harry (Rabbit) Angstrom . . . The books have also created a Kodachrome-sharp picture of American life . . . from the somnolent 50s . . . into the uncertainties of the 80s" (The New York Times). (Inventory #: 106733)
$2250.00 add to cart or Buy Direct from
Raptis Rare Books
Share this item