The Broncho Book; Being Buck-Jumps in Verse..roped for Relief of the Author, the Diversion of Tenderfeet, and the Jo of All Those Who Love God's Great Out-of-Doors 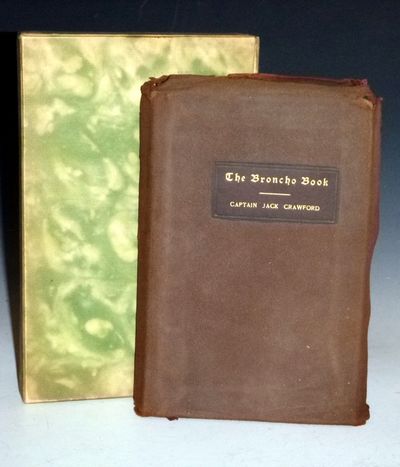 by Crawford, Captain Jack and Elbert Hubbard
East Aurora, New York: Roycrofters, 1908. Octavo. 143 pages, he dedicates the book to Thomas F. Walsh, after opening with his poems of the West with its vast canyons and open ranges. He writes to his Kentucky Rifle and his Winchester, he also writes likening himself to a bucking horse. He has poems reminiscent of his days serving with Pennsylvania's 48th Regiment as he writes the poems "The True Story of Marching Through Georgia" and "To the Daughter of John B. Gordon". When Crawford died in 1917, newspapers across the nation reported on the event, one writer paying tribute in these words: "[Crawford] was a real scout, and a real poet, a man with a warrior's soul and the heart of a woman" since he wrote affectionately with respect to women. Bound in dark brown suede lettered in gilt, red silk pastedowns, yapped edges with some short tears or chips. A good copy housed within a paper covered clamshell.(original?). (Inventory #: 027407)
$135.00 add to cart or Buy Direct from
ALCUIN BOOKS, ABAA
Share this item

Four Years in Rebel Capitals, with a Biographical Sketch of the Author By Louis De V. Chaudron (Author's autographed edition)

Shanghai : Commercial Press , 1935
(click for more details about The Li Sao, an Elegy on Encountering Sorrows Prefaces By H.A. Giles, Rabindranath Tagore; Chen Huan-chang)
View all from this seller>